Edward: Tomorrow, I Present My Research at the Largest High School I’ve Ever Seen 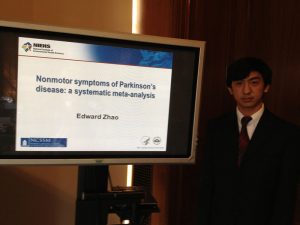 Hello, my name is Edward Zhao. I am a student at the NC School and Science and Mathematics (NCSSM) in the United States and I live in Cary. I am in the 12th grade, and I have been doing scientific research since 10th grade. The project I am presenting at NCISC is entitled “Premotor Symptoms of Parkinson’s Disease: A Systematic Meta-analysis.”

I’ve been working on this project since March 2012. My mentor and I came up with the idea together after participating in a symposium on the topic. One reason for the absence of a cure to Parkinson’s Disease is that we are unable to diagnose potential patients early enough. Premotor symptoms often occur earlier in the disease progression and are a promising part of earlier identification of patients. I would like to thank my mentor, Dr. Chen, NCSSM, and the SMT Center for providing the opportunity for me to present in China.

Today was our first full day in China. We visited a science museum and set up posters. That doesn’t sound like much, does it? Well, it felt like we never stopped moving today. It also took quite a bit of effort to translate our research into Chinese. The volunteers here were a big help! Anyways, as expected, we saw lots of people and lots of tall buildings. Our hotel is actually in a pretty quiet place. The school where we are presenting is the largest high school that I have ever seen. Tomorrow, we will be meeting the judges for the first time and presenting.

Edward: All of the U.S. Students Earned Gold Medals!