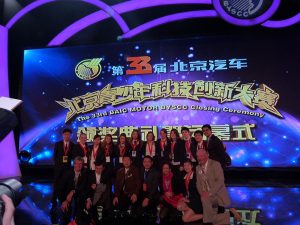 Today, we spent just about the whole day presenting our posters. There were many school groups visiting, ranging from kids in elementary school to kids in high school. I gave my poster presentation in Chinese several times today. Of the high school students I talked to, it seemed that many of them wanted to study in America or other foreign countries at some point in the future, whether it is college or graduate school.

I was also able to hear a few Chinese students present their posters. There were even two other posters on Parkinson’s disease, which my project is about. It was hard to understand many of the Chinese students’ posters since they had so much technical terminology, but I could tell that they put a lot of hard work into their projects.

In the evening, there was a ceremony where the special awards were presented. I liked that there were many teacher awards in addition to student awards. Between awards, there were also very well-prepared arts performances. Overall, it was a fun but tiring day!