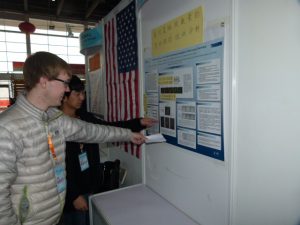 Yesterday, we presented our posters to the judges and also to some other people. We had a total of three judges. All of them actually spoke English, so that made presentations much easier for us. However, I’m not sure if my first judge actually understood what I was saying. He didn’t ask any questions afterwards except for things like, “How long have you been in America” and things like that.

I decided to present to my second judge in Chinese. It was a challenge, but at least I could be sure that he understood what I was saying! There was supposed to be a fourth “International Judge,” but I don’t think he got around to hearing the U.S. students.

After presentations, we attended the opening ceremony. They showed us a few short videos that were really well made. Several leaders also gave speeches. At that point, I started to get sick, so I wasn’t able to attend the banquet for dinner.

Right now, we are back at the exhibition center and presenting to the public. I slept for over 12 hours last night, and had a good breakfast this morning. Luckily, I don’t feel sick anymore, because I’ll be standing by my poster for the next 11 hours!