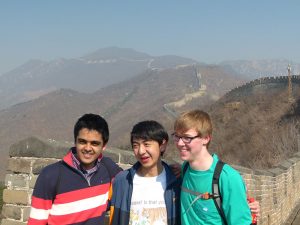 This morning, we ate a quick breakfast and then left early for the Great Wall. We drove out into the countryside to a section of the wall that even our chaperon Fran had never been to before. It turned out to be worth the drive because there were very few people other than us touring this section. The drive there resembled a lot of Western North Carolina. I heard remarks of places looking like both Asheville and Cherokee.

At the Great Wall, we had a good hike to get there and once there, we hiked some very steep sections to guard houses. The views of the other wall sections and of the surrounding mountains were really beautiful.

On the way down we took the luge slide instead of the stairs which was great. Everyone had a blast, especially the adults (aka Papa Bear Big Jeff and company). Once down the hill we had some time to shop a bit from the street vendors. Edward and I bought Obama t-shirts that have him drawn resembling Chairman Mao.

We left the great wall and had a great lunch at the BAST headquarters in downtown Beijing. We then went to the Silk Market to buy gifts. I got silk scarves and ties, as well as a stuffed animal and a few pens for gifts. We had KFC for dinner. Then we left for the hotel, where we gave gifts to the volunteers who helped us so much and packed for the trip home. I’m definitely sad about leaving tomorrow for home, I could spend a few more weeks here.