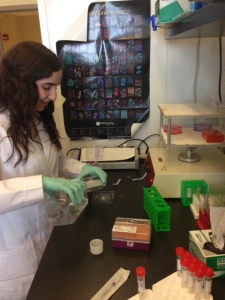 When Emily Ashkin’s mother was diagnosed with skin cancer, Emily, then 11, was left with a lot of questions.  She turned to the Internet and began researching articles about cancer.  What is cancer?  How do you get it?  But most importantly, what are the cures?  She wanted to understand so she devoted her time to studying the disease that claims more than 7 million deaths a year.

“My mom was diagnosed with skin cancer and my grandmother currently has lymphoma,” Emily says.  “I’ve seen a lot of people suffer from this disease.”

At first the articles, generally not written for a lay audience, did not make much sense.  But as she persisted, the language of the science and research began to make sense.  Emily began to grasp the meaning of cancer.

While at the White House Science Fair a couple years ago, Emily had the opportunity to meet researchers who were conducting cancer research and came home inspired.  She emailed every researcher she could find in the Charlotte, N.C.- area.

“I had no idea what I was doing.  I had only read the articles online,” she says.  “I kept reaching out to all these professors and they kept rejecting me.”

Again, her persistence paid off.  A professor welcomed her to his lab and she began a small breast cancer project.  And she kept coming back.

“I’ve really been in depth in my research,” she says.  “It has kind of been a progression.  All I wanted to do was learn.”

Working in Dr. Pinku Mukherjee’s lab at the University of North Carolina-Charlotte, Emily’s research involved a protein, MUC1, and the role it plays as a biomarker in tumor promotion and suppression that caught the attention of the judges at the North Carolina International Science Challenge.  Emily was one of four students selected to represent the United State in Beijing, China at the Beijing Student Science Competition in March.

“Emily is unusually passionate about her scientific work and that makes her unique, even among students that have successfully participated in the North Carolina International Science Challenge,” aid Dr. Fran Nolan, director of the science competition.  “Having seen the devastating results of cancer from close range, she has made it her long-range mission, not just a project, to fight that disease.”

Now a 16-year old junior at Providence Day School in Charlotte, Emily has wrapped her head around a future career where she already has a jumpstart.  She sees herself becoming a physician-scientist, earning both an M.D. and Ph.D., to specialize in the use of biomarkers and screening tools for early detection of cancer.  But first, she has a pit stop in Beijing.

“This is my first time going to the other side of the world,” she says.  “I still have not wrapped my head around it.”