The North Carolina Museum of Natural Sciences in Raleigh is widely known as the place to visit if you want to learn about local and regional wildlife, marine life off our coasts, bugs in your backyard, or even the state’s pre-historic timeline.

But, from now until October 22, it’s also hosting a traveling exhibit entitled RACE: Are We So Different?, making it the spot for learning about humanity and race. What brings us together? Are race and ethnicity based in biology? And, how has it all changed over time? 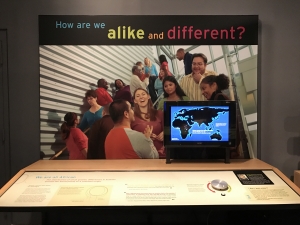 Take a walk through the free exhibit on the museum’s 2nd floor, and you’ll see, in both English and Spanish, that race is rooted in cultural beliefs, and you’ll journey through how science has been applied to those beliefs over the centuries.

According to the museum’s website, RACE “looks at race through the lens of science, history, and personal experiences to promote a better understanding of human variation.”

The exhibit is part of a larger public education program, crafted by the American Anthropological Association and funded by the Ford Foundation and the National Science Foundation. It’s designed to reach students, teachers, and parents and also includes a virtual tour and online science curriculum resources for middle and high school teachers involved in STEM education. The resources include lesson plans in evolution, ecology, genetics, biodiversity, and several other topics.

There’s much for museum visitors to see in person, though. Sprinkled throughout RACE’s historical components, museum staff placed science stations — some of which are interactive — that will challenge your understanding of ethnicity. It all springs from the bedrock principle that humanity emerged in current-day Africa and populated the world over millennia. Overall, the exhibit reveals our seemingly large outward differences are linked to very small genetic variations.

By placing your hand under a microscope to determine your skin color and compare it to others’, you learn about the evolution of melanin — the pigment, responsible for tanning, that gives human skin and hair its color. The lighter your skin, the farther your ancestors ventured from the African epicenter and its intense sun. In essence, shades of skin tone are merely a factor of migration.

In addition, with the help of a touch-screen map, you can explore how genetic variations occurred and spread world-wide. If you select a geographic region, you can watch where the changes pop up over time and how long it took for the shifts to occur.

The exhibit also reveals the genetic changes that cause differences in our outward appearances aren’t significant enough to alter who we are internally — at least not at the most basic level. A segment devoted to forensics reveals it’s nearly impossible to determine someone’s race after death. Bones and teeth — the human body’s fundamentals — are virtually the same for us all, demonstrating our baseline similarities.

In support of race as a cultural construct, the exhibit also displays instances when science “got it wrong.” For example, scientists once believed the larger head size prevalent among Caucasians equated to higher intelligence. This theory is false, but you can see the instruments used to measure skull size on display. It’s evidence of a time when society sought to divide populations based on perceived racial characteristics.

The exhibit isn’t only for middle-schoolers and older, though. Museum staff also cater to the littlest visitors, making it an option for parents with younger children. Amidst the higher-level discussions of heredity, genetic evolution, and ethnicity-based healthcare, you’ll find a comfortable table and chairs scattered with books that discuss race and ethnicity in age-appropriate ways. Puppets and dolls of many races and ethnicities are also available for children interested in playing.

Tickets are reserved based on time slots, and they are available here.