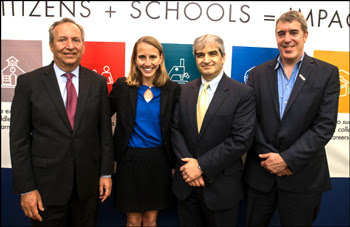 McCann previously served as the company’s chief financial Officer, chief operating officer and president for the past 13 years. During her time at Citizen Schools, the organization has tripled in size, growing from a small program in Boston to one that serves seven s
tates in 12 districts – including North Carolina.

“I am humbled by the board’s appointment and the opportunity to lead the next phase of Citizen Schools’ efforts to re-imagine middle school learning in this country,” McCann said.

Both Eric Schwarz, the co-founder and former CEO of Citizen Schools, and Lawrence H. Summers, the national board chair, believe the organization has a bright future in McCann’s hands.

“I am confident that Citizen Schools’ best days lie ahead,” Schwarz said. “Emily is a seasoned, strategic leader whose passion for educational equity and incredible energy will position Citizen Schools as a leader in serving middle school students.”

“She is uniquely suited to assume this role, given her experience, character and deep understanding of Citizen Schools’ students and partners,” Summers said.

Former CEO, Steven Rothstein, recently announced that he would step down to become a senior advisor to Citizen Schools, which is a position he will maintain until the end of June.