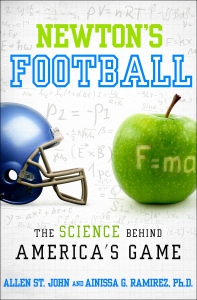 We understood that Newton’s Football would be a book not about football or about science but about ideas.  Ideas coming from the most unexpected sources, converging in the most delightful ways.  (From the introduction of Newton’s Football)

Full disclosure: I am a Philadelphia Eagles fan.  I bleed green.  So when I began reading Newton’s Football:  The Science Behind America’s Game, I was thrilled to see the book beginning with one of the most memorable plays in Eagles football.

In 2010, DeSean Jackson ran back a punt return as time expired to beat the New York Giants.  I mentioned this to Dr. Ainissa Ramirez at the beginning of our interview and also about the origins of the book she co-wrote with Allen St. John.  What follows is an edited transcript of our conversation.

I mentioned that I am an Eagles Fan, so I was excited when I started reading the book and DeSean Jackson’s run back against the Giants was featured.  I also found it interesting that later on in the chapter, I find myself reading about the history of the football and the way it was designed and how it creates an element of randomness.  How did this book come about?

Many Eagles fans found that the start was perfect for them. I work with a lot of Giants fans and they weren’t too happy about the beginning of the book.

I am a scientist by training, but one of my passions is to get the younger generation excited about science. A couple of years ago I put together some short videos. One series was called Material Marvels and another was called Science Xplained. They were 2-3 minute videos that explain things that we take for granted but have an impactful science lesson underneath it.

I did a short video on the physics of football where I talked about how the football got its weird shape. The official name is a prolate spheroid, meaning it is longer in one direction than it is in the other. Allen St. John’s agent saw that video and said ‘Hey, I have this really great guy who writes about sports and I wonder if we got you two to talk, someone who is a writer and a scientist, to talk about football since you already have some interest in this. I wonder if we could create something.’ So it was sort of an arranged marriage but it worked.

I really don’t know a thing about football, but I know how to ask really good questions.

In the book, you talk about game theory, about chaos theory, and whether or not woodpeckers get concussions and provide examples in football.  Was there ever an instance where you thought to yourself ‘this might be a bit of a stretch’?

Oh, no. One of the things I told Allen was ‘I would love to write this book, but it can’t be one of these physics books where we look at vectors and force. I am not interested in that boring stuff.’ And the second thing is that we were both committed that we weren’t going to stretch an analogy. If it doesn’t work, we don’t use it. And our editor was of the same mind.

First of all, how much of a thrill is that to talk to Jerry Rice for 20 minutes. That was huge and he was very generous to give us that much time. I was also thrilled to talk to guys like John Nash. I had an email exchange with him. You might remember him from the movie A Beautiful Mind. From the scientist point of view, he’s a God, you can’t reach him. So the fact that I was able to send a fax to his secretary and get his email, and that he was willing to do it is something. We were very committed to researching the book because we didn’t want to come off as kooks.

Another thing I like about the book was that you approach the controversial issue of concussions in football. You look at it from a few different angles. It was a very balanced approach. I didn’t feel like you made any kind of judgment call about that at all. Was there any concern that you would ruffle some feathers in the NFL by broaching the subject?

That’s a very good question. First of all, we went in knowing that readers are smart and we don’t want to push you in any direction. We want to give you the information and let you make the decision yourself, however you feel about it. We also didn’t want to be heavy-handed. We had a chapter that was sort of like, you know, 16 great questions about concussions, but it was really dark. And this book is not about being dark. It is really for people who love football or love thinking about things in new ways. So we didn’t want to add a chapter that was a downer. But concussions are really a downer, so how do you show that information in a way that isn’t heavy-handed and also talk to people who are actually thinking about this subject?

I spent some time at MIT for a sabbatical and I went to a talk about why don’t woodpeckers get concussions. And it just kind of stuck with me.  We should talk to this person who I know wrote a paper on this and that led to the next question, “why don’t woodpeckers get concussions?”, which gave us the opportunity to explain why helmets don’t work. Woodpeckers don’t get them, why do we? So it just went from one question to the next question. So that was our approach to addressing it. We really wanted to give people information and we didn’t want it to be biased. We wanted people to make their own decisions.

Were we thinking about the NFL? We reached out to them. We reached out to helmet manufacturers. We checked with the NFL for comment. No one really gave us any information. No one really responded to our inquiries, to be quite honest. So we said ‘Let’s try to talk to folks who are trying to solve the problem outside of the established way of doing things.’ That’s where we thought it was very rich because a lot of people are thinking about this. There are a lot of solutions out there and we wanted to be sure the reader knew about them.

What can we expect of you in the near future?

I am working on another book.  I’m focusing on getting girls excited about science. And one of my loves is material science, so I have a new project called Materials Girl that I am working on. That is going to keep me pretty occupied and that is going to have me travelling all over because I want to research it very well. What I am trying to get across is all the fun materials in our lives that we take for granted, like How does your computer work? That is all engineering and it is all really cool materials.

I have a small organization called Science Underground and we are committed to bringing STEM content—fun STEM content— in ways that are outside of the classroom. In fact, our logo is Make.Science.Fun. That will keep me very busy for some time. On the horizon, I guess there will be more talks because I seem to always be speaking, another book project focused on getting girls excited about science, and figure out ways to lather the entire planet with more fun STEM.

Find out more about Newton’s Football at www.newtonsfootball.com; and about Ainissa Ramirez at (www.ainissaramirez.com)