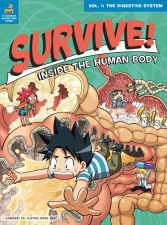 Survive! Inside the Human Body  is a multi- volume, educational science book series for kids, published by the imaginatively monikered No Starch Press.  The series was first published in Korea, where it has sold over 20 million copies and enjoys a huge following. Not least, I assume, due to its engaging, comic-book format.

Survive! is a three-volume, color paperback series, lavishly illustrated in the manga comic-book style favored in Japan and Korea. All outsized, neotenous heads with bulging eyes and dangerously spiky hairstyles. The narrative follows four quirky protagonists on their science-themed adventures through the human body, with each volume in the series dedicated to a different organ system.

The main characters are: Geo – a self-described “Master of Survival” who seems to benefit as much from dumb luck as he does bold action; Dr Brain – a stereotypical, grey-haired, bumbling scientist who does most of the heavy lifting where the science is concerned; Kay – Dr Brain’s blond, ponytailed assistant.  He seems endlessly exasperated with everybody, offering comic relief and extra science factoids in equal measure; and Phoebe – the clueless, goofy redhead who becomes the unwitting subject of Dr Brain’s crazy experiments.

Dr Brain is the only adult character in the group. The rest fall into that amorphous “kid” category so beloved of manga comics that could put them anywhere between five and twenty five years old (see also any John Hughes movie of the early 1980s).

The narrative follows the adventures of Geo and Dr Brain as they are shrunk to microscopic size inside the SS Hippocrates – a tiny submersible shaped like a T4 bacteriophage virus – and promptly ingested by the hapless Phoebe. Our heroes spend the rest of the three-book series careering wildly through Phoebe’s body systems, while Kay works frantically to get them out (amusingly, before the Medical Research Council find out what happened!) Fans of the classic movie Fantastic Voyage (1966), or the Martin Short movie Innerspace (1987), will recognize an old plot spun out for a new audience.

In Volume One: The Digestive System, the SS Hippocrates makes its way from the mouth to the rectum, exploring every aspect of digestion along the way. As Dr Brain explains the scenery, Geo zaps nefarious Heliobacter pylori bacteria with the ships laser cannons in the stomach, and chases parasitic hookworms through the small intestine. Eventually, they arrive at the large intestine, where (Spoiler Alert!) they are reabsorbed by villi before they can escape Phoebe’s body via her feces.

This cliff-hanger ending sets the scene for Volume Two: The Circulatory System. Here, as you might expect, our heroes are processed by the liver, pumped through the heart, and sucked into the lungs. Along the way, they learn about circulation, clotting, blood groups, the immune system, bone structure and more.

The series ends with Volume Three: The Nervous System, in which our heroes surf the brain and spinal cord, and play havoc with poor Phoebe’s speech and movement as they bump around inside her Broca’s Area and motor cortex. Events take a darker turn, here, as Geo and Dr Brain discover a tumor in Phoebe’s brain, and the medical science slips into the futuristic as they melt it with ultrasound, using the microbubble effect.

Every six pages or so, the cartoon format is interspersed with double-page text spreads explaining the ‘hard’ science. But for the most part, this merely serves to clarify and reinforce concepts already encountered by our heroes in the graphic context of the story. The science presented is well reviewed and clearly presented, and although the biology gets a little complex here and there (particularly in the liver and brain), weightier concepts and jargon are either successfully avoided or adequately explained.

One small gripe: I would have liked to have seen the scientists better represented. The tiresome stereotype of zany, bespectacled, grey-haired “mad scientist” is reinforced here once again, and the addition of a knowledgeable female character (i.e. a female Kay) might have helped redress this. And in a couple of places, the content becomes lost in translation from the Korean. For example, where Geo exclaims that “people are always saying my liver is swollen!” (a Korean expression meaning “brave, bold or courageous”, apparently).

But on the whole, this series is an educational triumph. It’s smart, it’s accurate, it’s comprehensive, and above all, it’s actually fun – a concept so many popular science books aim for, but so very few achieve.

I expect this series to prove very popular with American middle-school kids when the English language versions hit the shelves. And I would happily buy one for my own son, were he of the appropriate age. Until then, he’ll have to make do with re-runs of Fantastic Voyage and Innerspace…

Glenn Murphy is the bestselling author of Why is Snot Green?, How Loud Can you Burp?, and Science Explorers.  He lives in Raleigh with his wife, son, and two ill-tempered and rather large cats.