This week the student finalists of the North Carolina International Science Challenge traveled to Beijing to present their research. A part of the ongoing partnership with the Beijing Association of Science and Technology (BAST) since 2006, the high school researchers are taking part in the Beijing Youth Science Creation Competition. More than 50 North Carolina students have participated in the international program. 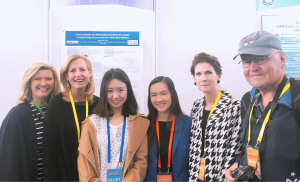 Blogging for the SMT Center from the competition, Ritvik Bodducherla, a student from the North Carolina School of Science and Mathematics wrote about language barriers in presenting his research on ellagic acid.

Today was especially interesting, because it was the day for the public to view our projects. I saw lots of young Chinese students interested in science. The day was especially challenging because many of the students and visitors had some knowledge of English, but they were not completely fluent. This meant I had to break my research down to kindergarten vocabulary, which was incredibly challenging. However, I really enjoyed seeing all these people who wanted to know what my research was about, despite the obvious language barrier.

We then took a bus to the West Campus, where interactive science displays were set up. We used 3D printing pens to design masks, but there were also stations with make-your-own catapults, robots, virtual reality, and more.

Elizabeth Farmer from the North Carolina School of Science and Mathematics was in awe of other research projects:

After all of my judges came around I got a chance to explore the competition and go to the mini maker fair. I met some of the people from the delegations from Australia and Israel and talked to them for a while as well. The mini maker fair was really cool and had some very creative and impressive projects. I was also blown away by some of the other research projects there. For example, one group had come up with a method to help detect silent heart attacks.

Marti Skold Jordan, a chaperone and delegate on the trip was a judge for part of the competition and summed up the collaborative nature of the event:

A promising young scientist, a middle school student from Macao summed it up perfectly at the end of his presentation this afternoon about the need for importance of scientific innovation and discovery.

To view all posts from Beijing, visit http://www.ncsciencecompetition.org/?cat=128