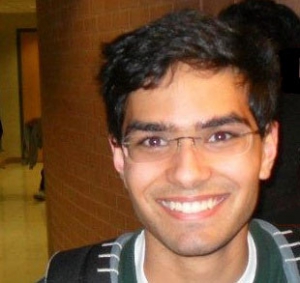 Vipul Vachharajani is an 18-year-old senior at the North Carolina School of Science and Mathematics (NCSSM). He spent 8 weeks during the summer researching RNA-Binding Proteins at Duke University Medical Center, and has continued this research during the school year. Vipul is also a co-captain of the NCSSM Quiz Bowl Team and Math Club, and participates in Science Bowl. In his spare time, Vipul enjoys playing table tennis and rudimental snare drum. His mentors are Dr. Kyle Mansfield and Dr. Matthew Friedersdorf at Duke University Medical Center and Dr. Myra Halpin at NCSSM.

HuR is an RNA-binding protein which is important in normal cell function. Dysregulation of HuR can lead to neoplastic phenotypes and is implicated in carcinogenesis in colon and brain cancer. Because of its ubiquity, HuR is an important target of study both in the context of diseases such as cancer but also in the basic study of RNA regulation.

HuR acts in the cytoplasm to prevent degradation of mature mRNA molecules, but HuR’s nuclear function is less well known. Recently, HuR targets which bind only intronic sequences in unspliced RNA have been proposed, which would reveal a HuR function which is distinct from the cytoplasmic one and may be significant in understanding the global cellular function of HuR.

We used RNA immunoprecipitation to confirm HuR binding to intronic only sequences of the proposed targets. We then used siRNA knockdown of HuR to show a functional effect of the observed binding on pre-mRNA transcript abundance.

Our results show a high degree of HuR binding to intronic sequences in the NFATC3 gene, but not to NFATC3 transcripts lacking the putative binding intron. Furthermore, HuR knockdown resulted in a significant decrease in pre-NFATC3 transcript levels. This indicates that HuR participates in functionally-significant, intron-specific binding, and suggests a complex nuclear function of HuR that may include splicing and splicing-concurrent processes.

I could barely speak this morning-I woke up and found that I had nearly lost my voice. And it was only the one day where I absolutely had to talk. After breakfast, we went to the Yucai School for the poster judging. The international delegations were judged separately from the Beijing projects, by special judges who were all very fluent in English. This was done because doing well in the Beijing Youth Science Creation Competition earns a student extra marks on the Gaokao, the huge entrance exam that determines where a student will ultimately attend university. So while it’s a lot of fun for us, it is a serious matter for the Chinese students.

Still, we managed to chat with both the international students and the Beijing students, in both English and the smattering of Chinese that I picked up. I generally walked up to a student, asked, “Nĭ shuŏ yīng wen mā?” (“Do you speak English?”) and then either talked in English or pantomime for the rest of the time. I found a number of the projects particularly fascinating. One student created a 3D visualization system using the Xbox Kinect system that showed a stick figure making the same poses as a person standing in front of the camera. Another student traveled to the North Pole to do research on the effects of human activity on the fertility of the soil. That student recently went to the South Pole as well and will go back to the North Pole to spread awareness of the environmental problem. While all of our team did our work in university labs, I was more impressed with the amazing quality of work the students did on their own time using only resources provided them by their schools. Of course, the opportunity to travel to the North Pole is certainly unique and not available to students in the US.

The judging was pretty interesting as well. Since my voice was hoarse, I preceded each interview with “Sī yā” (“I’m hoarse”) and then explained my project as best I could. By the end of the day, I actually couldn’t make a sound. That felt helpless, especially since the Australian delegation came over then and asked about my project. I started to talk, and was promptly stopped: “No, that’s probably a bad idea. I’ll just read your poster.”

Following the judging, we went to the opening ceremony, which included performances by a children’s choir and speeches by the heads of Yucai school and the Beijing Association for Science and Technology. The entire affair was overseen by a mascot. Ivan thought that the mascot looked like an onion, while I thought it looked like a stripe of toothpaste. Another interesting part of the ceremony was the pledge made by the judges to judge fairly, and a pledge that we as students had to give to swear that we would be truthful and honest in the competition. There was a great emphasis placed on honesty and transparency in the entire competition, which we thought stemmed from the relatively small fraction of participants that would get awards.

Dinner was a banquet for the international students, which involved lots of speeches and gift-giving. The food was fantastic, and Greeshma and I found plenty of vegetarian food to eat. Tired after a long day, we promptly went to sleep. I wonder if I’ll ever be awake enough to get all of my homework done this week! 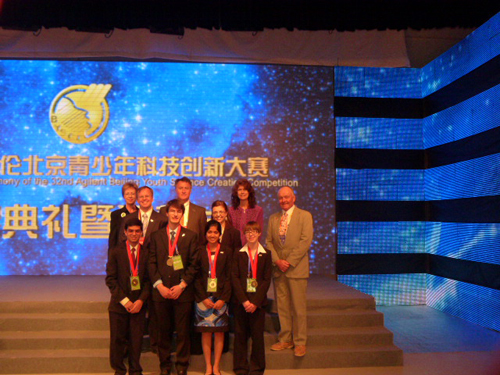 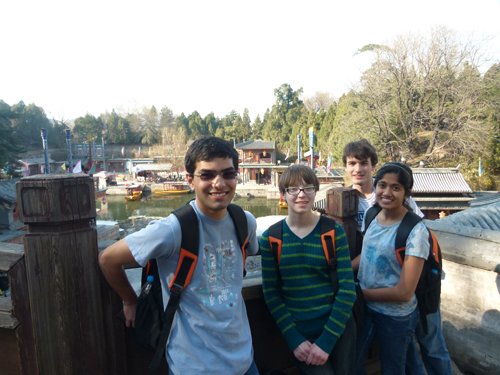 The day before, we had arrived in Beijing after nearly a day in transit. We met our student guides, Ted, Alan, and Irene. All three were university students majoring in English, and chatted a little before getting on the bus to go to the Beijing Dong Fang Hotel to eat dinner and go to bed. At dinner we met the Italian delegation, all of whom were young (in middle school). They didn’t speak very good English but their Chinese guides were fluent in Italian. Ted and Alan explained to us that each mass media major must choose a second language (other than English) to major in. Ted and Alan were learning Spanish, and Irene was learning German. I was struck by the number of languages represented among the Chinese translators. In the USA, we’re mandated to learn one foreign language, and most people don’t retain fluency past high school. By comparison, these students were completely fluent in three languages. After dinner, Ivan and I collapsed and didn’t get up until the next morning.

We had breakfast at 8:00 the next morning and headed off to the Beijing Museum of Natural History. On the way, we learned a number of Chinese words. For example, the subway is “dì tië” and the equinox is “chün fëng.” At the museum, we saw lots of interesting exhibits. The largest one was the dinosaur display, in which a number of real reconstructed skeletons were kept. There was a very large, long-necked one that was about 20 meters long. The museum tour guide noted that scientists estimate that it took more than 4 hours for food to reach its stomach. We also saw the hall of mammals and endangered species. It wasn’t hard to guess which extinct species is “dù dù niäo” (that’s right, it’s the Dodo Bird). We also visited the Human Body exhibit. One striking thing about that exhibit was the diorama about fetal development, which included formaldehyde jars filled with what we all assumed were real fetuses, in various states of development, from conception to just before birth (this one was the most disturbing). After the museum visit, we ate lunch, and Alan commented on our skill with chopsticks. We explained how this arose from our frequent instant ramen noodle consumption, and he laughed.

After lunch, we headed to the exhibit hall, at Yucai School, and set up our posters. Alan and Ted translated our titles and a brief 2-sentence summary of our work. We chatted with the Australan group, who were from three schools in Perth. We learned about the dangers of “drop bears,” which have attacked 31.5 of 125 residents in Australia. Turns out, drop bears are a national joke played on tourists and immigrants. We then played British quiz bowl, which focused heavily on cricket stars and prime ministers. Needless to say, we all did terribly. We played on the playground, which had some really interesting structures that worked like the Gazelle exercise machine.

Then, we ate dinner at the school. Alan taught Greeshma and me how to say we are vegetarian in Chinese: “Wö sù shì.” He also explained the meaning. “Sù” means plain, so in saying “I am plain” we imply that we only eat plain food. There were some really tasty fried noodles, and a soup which we were told was vegetarian but which we didn’t believe. Ivan tasted it and nearly fell over. Clearly it was an acquired taste.

After dinner, we waited for the bus inside a lobby-type area. There, we drank Lipton jasmine tea and practiced for our dance on Friday (part of a cultural show). Someone commented on the squat toilets and we were struck by our Asian-ness and relative familiarity with them.

We got on the bus and arrived back at the hotel. After a long day, we returned to our rooms and slept. 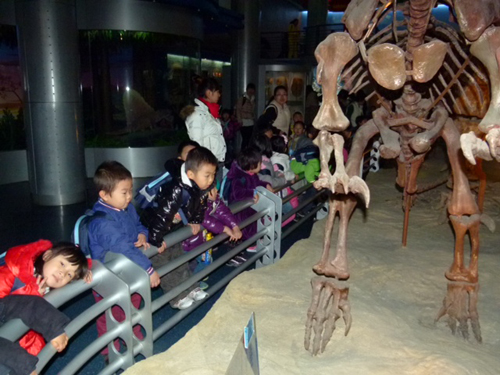 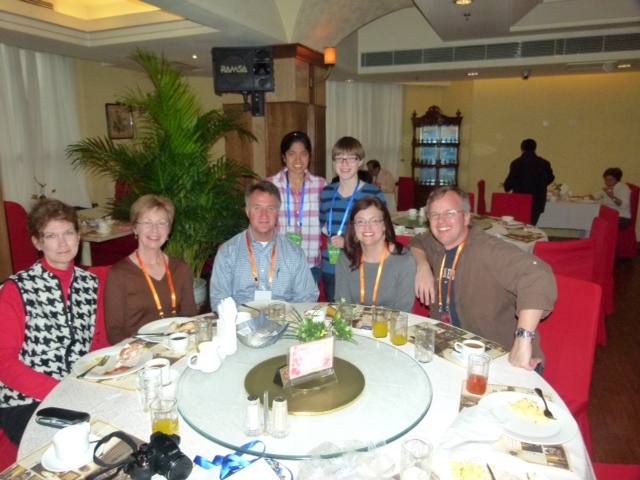