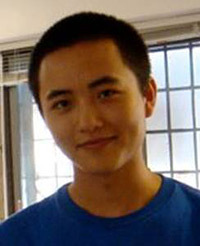 Ryan Lee, 18, is a senior at the North Carolina School of Science and Mathematics (NCSSM). Through the Howard Hughes Precollege Program, he began conducting research at Duke University Medical Center and has since continued his research during the school year. Outside of the lab, he is captain of the NCSSM Science Olympiad team and a president of the Biology Society. Ryan recently took up rock climbing and is a licensed windsurfer. His mentors are Dr. William Parker at Duke University Medical Center and Dr. Myra Halpin at NCSSM.

Sunday, March 27, 2011
Today we had breakfast in the hotel again. I had fried rice and watermelon again. Although the sausages were brownish (suggesting ungulate meat) it tasted a bit like turkey. For the first time they had peach juice at breakfast.

We went to the high school and watched an awards ceremony. On the way there, Melissa shared her excitement at the vibrations that bubbles produce inside a water bottle. I was disappointed that my water bottle had little a 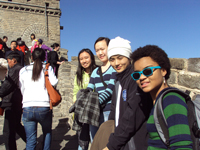 ir in it, such that it did not vibrate sufficiently. When we arrived at the high school, I used the Eastern toilets there. It was refreshing. They put a lot of foreigner footage in highlights video. I was also shown for a few seconds. We got first class awards just for being foreigners. The pronunciation of all the foreigners’ names was quite off. I was disappointed that none of the Chinese projects we visited yesterday won the top prize of advancing to the national science fair. At the end of the ceremony, there were at least 4 clappers under my seat.

Then we ate lunch at the high school. Some cafeteria workers congratulated me on my first class prize, and I felt pity for all of us. All of the food at lunch was good. There were mushrooms, celery, and beef. I drank a bowl of congee. We couldn’t help but compare this food to the PFM food at home.

We took an hour’s bus ride to the Great Wall of China (GWC), the Badaling section. I folded a heart and a rose on the way. I taught Angela how to make the rose. We used magazine paper, which did not fold very well. We had lollies on the way, and ripped their wrappers. We climbed the GWC in a few hours. The weather was clear. We saw a plastic bag, drifting through the wind, wanting to start again.

On the bus ride back, I wanted to make an origami horse, but found myself holding a square piece of paper, staring directions that called for triangular paper. It was disappointing. We then ate dinner at the hotel. We then took some photos (pho-toehs). 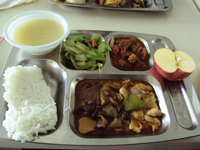 In the morning we ate breakfast at the hotel. There was the good egg fried rice again. I also ate many tumbled watermelon pieces. We didn’t play any word games because there was not enough time. My camera ran out of batteries so I did not take any pictures for today.

We then went to the high school for a poster session. I only got one judge. He did not seem like he understood the project. I explained my project to many Chinese civilians through my interpreter, Lucy. I realized the grave role of interpreters in world relations. I felt that people should start selling pins that say “I love my interpreter.” I would buy one.

In the middle of the poster session, we had lunch. There was snow pear. It was very juicy. After lunch we had some free time. I learned winter boxing from another interpreter, Aaron. Then we took pictures next to a sleeping man. In the second half of the poster session, I walked around the gym with Melissa and looked at other projects. We looked at two projects with a Mandarin-Cantonese interpreter, who was also supposed to be a Mandarin-Italian interpreter. He was funny. I also saw a very thin and light Sony Vaio.

Then we ate dinner in the school canteen. There was chicken soft bone, which I loved. There was also lots of choy and wood ear. It was delicious. I also ate two bananas. We received Chinese papercuts as gifts from the school.

Then we went back to the hotel and had an awards ceremony. There were many dances (including Bhangra). They turned on a bubble machine at the most interesting times. We received a gift from the city. It was a 2D wheat straw artwork. I was glad the gift came in a big square box because I can use it to store the papercut during travel. The audio in the ceremony was loud.

Friday, March 25, 2011
In the morning we ate breakfast at the hotel. There was some fried rice, which was good. I ate a lot of watermelon. The watermelon was so smooth in texture that it seemed like they tumbled them. I thought the hashbrowns were oily. We sat at a table that was bathed in sunlight, and it was quite uncomfortable. I tried the kiwi juice, but it didn’t have the tangy flavor of kiwi. We then went to the high school and talked to Chinese students about their school. We discovered that in addition to uniforms, girls have to cut their hair in a bobbed style. I noticed it was difficult to tell the difference between boys and girls. I thought that the school was pretty militant. We saw preserved human fetuses and stuffed animals in the school museum. We then ate lunch at the canteen. The lunch tickets reminded me of the anime series Angel Beats. The food there was better than the hotel food. We went back to the hotel, and I got one of my shoes shined by a shoe shining machine. I was surprised by the softness of the brush. I expected the texture to be similar to the brushes on the sides of escalators.

We then attended the opening ceremony, which was full of pomp. I thought that the light decorations were not bad. I was surprised that they had smoke machines and confetti guns equipped at the high school. I wish that they had an interpreter, because I didn’t understand anything. We learned that Chinese students pledge with their fists instead of an open palm. We then had a poster session. I learned that some Australians pronounce the letter “z” as “zee” and some pronounce it “zet(zaid?)”. Angela didn’t know that “z” could be pronounced as “zet”. I did not receive any questions during the poster session, which I deemed fortunate because of the difficulty in explaining my project. I realized that all science should be taught in English as is done in Hong Kong for better communication in scientific fields. We then ate dinner at the school canteen. It was good as well.

Later, we went back to the hotel to work on homework. We also played more word games.

Thursday, March 24, 2011
My name is Ryan Lee, and I am a senior at the NC School of Science and Math. On the first full day in Beijing, we visited Jietai Temple. It is an old temple that has lots of interesting trees blown crooked by the constant wind. I saw no monks, and later found out that they were secluded in another part of the temple. It was highly disturbing. It seemed like a ghost town without monks. I felt that we were touring an abandoned temple that was being renovated. It was very cold and windy.

Then, we ate lunch at the dining hall of Dragon Spring Hotel. It was more authentic than the breakfast we had in the morning. There was choy and fish. We played word games in the free time we had after eating.

Then we went to Dayu High School to set up our posters. On the bus, we tried some Danish candy that tasted like melon seeds and preserved orange peel. We got to see the other projects that are going to presented by students from China and other countries ï¿½” Denmark, Japan, Australia, and South Korea, to name a few. Then we went back to the hotel and had a welcoming banquet. There was a lot of food at the banquet. I enjoyed the wide selection of juices at room temperature, such as hawthorn, date, peach, blueberry, and kiwi, though they would have been tastier if chilled. I thought the frog was spicy and tasted like chicken. I felt that the fish was really good, except there were scales on the skin. I also felt that Lisa Rhoades was really good at trying everything. Using my engineering skills developed through Science Olympiad, I constructed a contraption that would allow my camera to record a panorama video of those seated around the table. After the banquet, I felt sad that most of the food would be going to waste. Afterwards, we went bowling with an international group. I got a spare on the first roll, but didn’t do well later. We played some arcade games later.