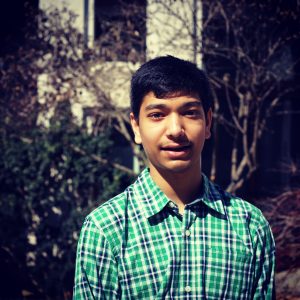 Rohan Deshpande is a Sophomore at East Chapel Hill High School, North Carolina. He has participated in Science competitions and Eco challenges since sixth grade and has received national and international recognition in several of them.

Over the last three years, he has worked on two sustainability initiatives that he started at Phillips Middle School on recycling and composting. This work has received national recognition, and won first place awards at two prestigious national eco challenges: first place award in the Siemens “We can change the world” national challenge and the Lexus Eco national challenge. He also received a second place award from the Environmental Protection Agency (EPA) video challenge.

Last year, he became a 2015 Conrad “Spirit of Innovation” summit diplomat and was invited to present his project at NASA, and was also honored as an INTEL International Science and Engineering Fair (ISEF) finalist. Last summer he was also selected as a finalist by the Google Science Fair. His engineering project was one of 45 projects and the only one from NC chosen by Google as “ideas that will change the world”.

This year he became a 2016 “Spirit of Innovation” summit diplomat and has been invited to present his project at NASA this April.

In the future, he plans to pursue a career in engineering/technology and entrepreneurship with a focus on developing innovative solutions for solving world’s pressing problems such as sustainable energy.

Humans have been using switches for controlling lights, and other power sources, for a long time. When people leave their rooms, they often forget to turn off these switches resulting in the wastage of electricity. There is a need for a new cheap technology that counts the number of people in a room and automatically turns off lights and other powered devices when a room is vacant. This will reduce environmental pollution from unneeded electricity generation from fossil fuels.

My solution is an inexpensive device that accurately tracks the number of people in a room by monitoring its entrance. This small device, installed invisibly, includes two low-power laser beams shining on two photoelectric sensors. The data from the two sensors are outputted to an arduino microcontroller, which monitors the people count in a room. The arduino knows whether to increment or decrement the people count in the room based on the sequence in which the two photoelectric sensors gets tripped. The arduino then communicates with a relay which controls the state of the power sources (on or off).

I installed and tested this device at a local school restroom. Analysis of the data collected showed that my School district would save over $10,000 annually by reducing wasted electricity consumption. I also estimated that my device will lead to savings of more than 160 million dollars annually if it was installed in all public school restrooms in the United States. My device was also tested at a University and the fitting rooms of a major retail chain to verify its accuracy and gather more data. The amount of wasted electricity would decrease significantly if my device is implemented in numerous locations including homes, schools, public restrooms, offices, retail stores, etc., thus also lowering the environmental impact due to wasted power consumption.