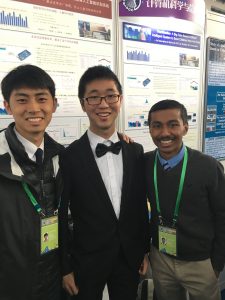 We presented again, although the atmosphere was much more relaxed this time. Our audience today was not comprised of scientists and judges but instead of local-area students and adults. Over the course of the morning, almost 5000 people passed through the fair. My aunt and uncle were going to come, but it would have taken them three hours each to make the trip from their home to Huairou, so it wasn’t very feasible.

After lunch, we took part in an exhibition where we made aloe vera gel and got to see a 3D ceramic printer in action (watch out, Jingdezhen!) Then came my favorite part of the day: I got to go on a run! It was short, but I had the opportunity to go over to the opposite side of UCAS campus where I saw the student dorms and maybe almost one hundred students exercising on the tennis and basketball courts. Afterwards, I cleaned up for dinner and changed back into “business casual” (read: business formal) for the special awards ceremony.

For the special awards ceremony, we were bussed over to a new building on campus that was essentially a big auditorium. The organizers of the event gave all of us plastic clappers and light-up headgear; the entire thing was very high-energy and exciting, although that didn’t stop us four students, and some of the adults, from dozing off. The ceremony began with a traditional Chinese performance and then a kung fu act where students were invited onto the stage. I remember nothing after that, waking up at the end of the ceremony to see Ana Sofia with a 3000 RMB prize!!

After my brief nap, I felt re-energized enough to hang out with Arjun, Dory, and Ana Sofia a little bit instead of going directly to bed. Later, some kids from Australia and the Czech Republic joined us and we moved down to the lobby. Andrej (is that how you spell it?) taught us a game where you sit around a table and cross your arms over your neighbors’ and basically play Buzz in that position. It was awkward and uncomfortable in the beginning, but became really fun once everyone got the hang of it.

Day 3 was much better than the previous ones, in terms of fun and of jetlag.