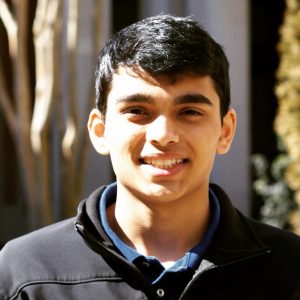 Nimit Desai of the N.C. School of Science and Mathematics shares his stories from his trip to China for the Beijing Youth Science Creation Competition. Nimit was part of the delegation for the North Carolina International Science Challenge (NCISC) hosted annually by the North Carolina Science, Mathematics, and Technology Education Center (SMT Center).

“We are making our final descent into Beijing, the weather is…” It had been a long flight, 13 and half hours to be exact, and I was exhausted. I fell asleep for about six hours of the flight, watched two movies, and listened to a few hours of music. Finally, we had landed into Beijing, and although I was tired, I was also excited. I was excited for the conference, the other delegates I would meet, and the authentic food I’d get to eat. As soon as we got out of the airport, I was surprised by the atmosphere. It wasn’t smoggy as mainstream media depicts Beijing as having, and the skies were clear, blue, and beautiful. As we drove to the conference center, I noticed the different architecture and scenery of the city as compared to the United States. For one, all the bottom half of all the trees along the road were painted white, all the apartments were tall high-rises that looked essentially the same in its own complex. Some of the traffic lights even had timers so that the people would know how much time was left on the green light. Overall, there were many similarities and differences between Beijing and the United States.

Once we got to the conference center, we quickly got the keys to our rooms and went to our rooms. We changed, brushed, and cleaned ourselves up from the flight, and went to dinner. Dinner was also quite interesting, as it was nothing like what P.F Chang’s serves. Even though it was different, the food was quite good, and I struggled to use the chopsticks. Hopefully, I’ll get better at it.

The Workout for the Week

“Are we there yet,” I asked as we made our way to the Great Wall. Today, we visited the Great Wall of China, one of my dreams I’ve had as a kid. It was about a two-hour drive to the Wall, but once we got there, I knew it was definitely worth it. The Great Wall of China was just as I had imagined it – high up in the mountains and long. It was again a beautiful day today, and that made the visit even more amazing. We were able to walk all the way to the top of the wall, took some nice pictures, and came back down. The wall had very steep parts at some points, and the walk to the top was not easy. My legs were extremely tired after we came back. Right before leaving the Wall, I bargained with a local for a small panda that I really wanted. This was my first experience bargaining in China, and it was a lot of fun. I can’t wait for the trip to the Silk Market later on during the trip.

First Day of the Competition

“What is the biggest weakness in your project?” Honestly, this was the hardest question a judge asked me today, not because I might’ve thought my project was flawless, but because I had never gotten that question before, and I never thought about it. Eventually, I was able to think of quite a few flaws, and the judge seemed pleased with the answer. The conference room where all the projects were held was extremely cold, making the whole process even more tiring. Most of the judges were Chinese, and understanding their questions sometimes became a barrier. One judge, however, was from Harvard, so were were able to communicate much more easily. In fact, after I finished presenting my research, I found out that he does research in a similar field as I do. After the judging ended, we went back to our rooms, and relaxed a little. At night, there was an opening ceremony with really great food again. Also, I think I’m getting better at using chopsticks!

“You’ve got another round of judges coming today,” the organizer told us at the beginning of the day. However, after 3 hours of standing next to our posters, no judge came – only other curious students who wanted to know more about the research. After the “judging,” came to a close at 12, we had lunch at the conference center again. As usual, the meal did not end without watermelon. Watermelon, considering it has been there at the end of every meal so far. After lunch, we traveled by bus to a nearby museum exhibit on China’s nuclear bomb development program. Honestly, it was a little boring, as it seemed as more of a propaganda visit. After the exhibit, we went to Yanqi lake, which was very large and beautiful. We walked along the lake, and then made our way to a high point on a hill. From this point, we were able to see the entire Huairou District of Beijing, quite a breathtaking view. After the visit, we came back to our hotels and got ready for the Special Awards Ceremony. This ceremony was the highlight of the day, as it seemed as if I were watching the Oscars. The auditorium was quite large, and the ceremony was almost like a show, filled with performances, hosts, and amazing theatrics. To make the ceremony even better, Holly won a special award! Finally, we got back to our rooms and I immediately fell asleep.

“I don’t understand, sorry,” I often heard from ongoing visitors today. It was Public Day today, meaning anyone could come in and look at our projects. The visitors who came were mainly kids with their adults, and some VIP. Most of the visitors looked at the poster, saw English which they could not read, and moved on to the next poster. However, some brave people would come up and try to read my poster, at which point they would say they didn’t understand. I then tried to explain my project in terms of metaphors which they could understand, and this helped them understand a little bit better. It was really exciting explaining my research in this manner, as I could share what I spent so much time on with people interested in science. This is actually what stood out to me. In America, we don’t really have conferences where young kids could come in and learn about science experiments and projects. I was really impressed by the value the Chinese placed on science in this way. After the public display of our posters ended, we then had lunch (topped with watermelon), and went to take a big group picture with all the students in the competition. Finally, we went to the closing ceremony, where again we saw a great and well-organized show. The ceremony was a great way to end the day.

“Hi my Chinese friend,” the card read. Our translator had prepared small cards written in Chinese and English for us to give to Chinese strangers in case we got lost while sightseeing the Summer Palace – thankfully we did not need it. The Summer Palace was beautiful, and larger than I had imagined it to be. It was centered on a large lake, with many special amenities built for the Emperor of the Chinese dynasties. It was indeed quite marvelous. Most of all, I thought the temple built at the summer palace was most interesting and beautiful, as it was like a large pagoda resting on the slope of a mountain. From the summer palace, we then left to eat lunch at a local restaurant. The food was great, and plentiful as well. As at the conference center, there was watermelon for desert. From there, we took a long car ride to the Silk Market, where we bargained for scarves, chopsticks, magnets, and other souvenirs. This was actually very exciting and fun, as we tried to employ a certain number of tactics in our bargaining arsenal. Often times, we would just leave, knowing that the salesperson would generally call us back and offer a lower price. This was by far one of my favorite days not only because of the summer palace, but also because of I finally got to do the shopping that I had heard so much about. When we got back to the hotel, I packed my suitcase with all the new gifts I had gotten for family and friends back home, and prepared for the long flight back home.

As I think about this whole trip, I am simply extremely grateful for the opportunity to explore a new country and learn about research being done by my peers all around the world. Even though I will miss the watermelon, chicken stir-fry, the Great Wall, and much more, I look forward to sharing with my family and friends the pictures I took and souvenirs I brought back.