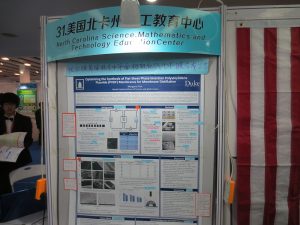 After working with our translators over posters for hours, we finally had everything good to go. Little slips of colorful paper adorned my otherwise monochromatic poster, glossing over some of the important subheadings and captions in Chinese. I marvel over our handiwork, the product of hours upon hours of me attempting to convey my project to the translator—stringing together bits and pieces of multi-lingual jargon and attempting to form a coherent presentation in Chinese.

My translator, like all the others, was a volunteering college student with an affinity for foreign languages. By the end of day, she had constructed a flawless Chinese rendition of my presentation and was able to deliver it as easily as I gave my original English version. This may not seem to be an incredibly impressive feat to the casual observer. But as a Chinese-born American, fluent enough in Mandarin to hold casual conversation but not scholarly discussions, I recognized the extraordinary dexterity with which she navigated the nuances of inter-language translations. Language is such a fluid entity that it’s difficult to translate by denotation only, hence the awkward “Google (mis)translated” situations that often arise when people rely solely on technology.

One of the high-ranking officials actually came by my booth after the opening ceremony, and he seemed pleased with the presentation we collectively gave him. Solid ending to a tiring day of judging.