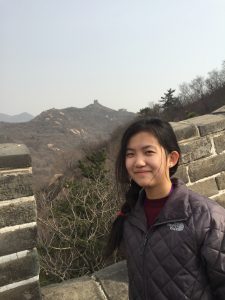 The Great Wall
On our last day in Beijing we went to the Great Wall of China. First, we rode a bus out of the city and into the mountains. Judging by the steep slopes we were astounded to see one of the great construction wonders of the old world. We entered the Great Wall at the Badaling section and attempted to race to the highest battlement we could see. The wall had large stairs that were fun but sometimes terrifying to climb given my fear of heights. In the end, it was so rewarding to look down after we reached the top and see the architectural feat that apparently can be seen from space.

Beijing Food
Everyday we got to eat authentic Beijing cuisine. Something interesting is that the Chinese do not have fruit juice. They usually drink soymilk or tea, and even coffee was not common. Every meal they would have an assortment of (usually pickled) vegetables, meat dishes (including pork buns which we all ate a lot of), rice, soup, Asian-style dim sum pastry desserts, and watermelon. Watermelon was the one fruit constantly available in China and the Chinese enjoy eating it very much.

Summer Palace
One of my favorite memories from the trip was visiting the Summer Palace, or the summer home of the Emperor of China. The Palace is quite possibly the most opulent remnant of dynastic China. We were amazed by it size and the attention to detail placed on the many buildings. The Palace has mountains but also large lakes (that we heard from our translators were covered in water lilies during the summer). There are beautiful bridges and islands with fancy teahouses on the lake.

Hotel Rooms
Chinese hotel rooms are very different from American hotel rooms. First, you have to insert your hotel key (after you using it to open your door), into a slot on the wall inside your room in order to get electricity. We thought they probably did this to conserve energy, so that you don’t leave the lights on when you leave the room. My roommate and I thought this was a very clever form of sustainability, and it also reminded us not to leave our key cards in the room. In addition, the beds were made out of a wooden bed + a mattress pad, so the beds were quite hard instead of squishy like American hotel beds. However the beds were still extremely comfortable and better for our spines.