Forrest: It Was Exciting to Present at the 33rd Annual Competition

Forrest: It Was Exciting to Present at the 33rd Annual Competition 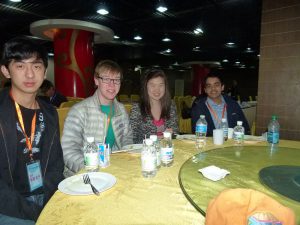 This morning, I woke up and dressed in my suit for the first day of exhibition and judging. The bus left for the school at 7:20 am, which seemed entirely too early for me, but it turned out to be fine. For the morning block of exhibition (four hours) we were judged. I had three judges total, only one of which I was sure really understood my project. He mentioned that he had friends that did studies with fluorescence and he asked me about auto fluorescence.

After the judging was over, we went to the school cafeteria for lunch. It was interesting that all of the lunches were the same for everyone: basically some white rice, meats, veggies, potatoes, and a banana. After lunch we went to the opening ceremony in the school’s auditorium. The auditorium was really nice just by itself and the competition had added large screens and lighting features. We heard speeches from important people at the competition and everyone seemed very excited about both science and this year’s competition, which is the 33rd annual competition.

After the ceremony, we headed back to the gym for more exhibition time. It was exciting because important people were walking around to see the projects and reporters were set up everywhere to take pictures. A Chinese student came and talked to me about my project. I thought he understood the project and asked better questions than did most of the formal judges. The project he was presenting at the competition was not even in a related field — it was botany.

The exhibition wound down for the evening and we left on buses to drive to a different hotel than the one we are staying in for a foreign guests and students banquet. We ate a four-course traditional Chinese meal and shared a toast with the heads of the competition. The food was excellent. We then headed back to the hotel where I promptly went to sleep after the long day.