Forrest: All the Chinese Students Wanted Pictures With Me

Forrest: All the Chinese Students Wanted Pictures With Me 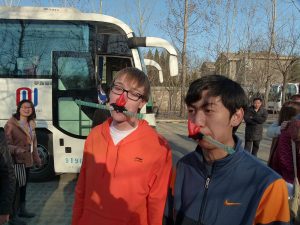 This morning we ate a quick breakfast and then it was off to the school for a full day of exhibition. During the morning session of exhibition we saw a lot of school groups that had come from all around Beijing to see the presentations. Seemingly because I was the only white person representing America, tons of Chinese students wanted to get pictures with me by the American flag.

We ate lunch at the school cafeteria and then headed back to presenting for the afternoon session. More school groups came through and I took more pictures. Some groups were really young kids, like elementary school age. It was interesting to me that they are getting introduced to research and poster sessions so early on in their schooling.

We ate dinner again at the school cafeteria and then went to the evening party and special awards that was hosted in the school’s auditorium. There were performances interspersed with special awards for the Chinese students that were mainly cash prizes. When this finished it, was late and it had been a long day so we headed back to the hotel and quickly went to sleep.