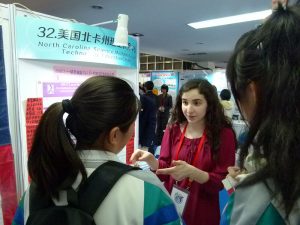 Getting to know the other delegations has been quite a culture shock! They immediately assume I’m American… It’s like I have a sign on my head! I’ll say hi, share my name, shake their hand… And before they even tell me their name, they say, “You’re American, right?” I think we come off very extroverted and friendly, but a lot of other countries aren’t used to that. We’re just the “crazy Americans!”

However, I found it very interesting during the judging session today. A few of Chinese students came to me and asked to take a picture with me. They say it’s because they’ve never seen anyone so white before! I think I’ll take that as a compliment.

So here are the stereotypes that other countries seem to judge Americans by:

1. We eat nothing but McDonalds (inspired by the Supersize Me movie).

4. We aren’t the smartest cream of the crop.

5. Apparently, we use corny pick-up lines.

Tonight, I went to a karaoke party with delegations from Australia, Denmark, Ukraine, and Italy. I’d have to say it was probably one of the most exciting events of my entire life. Unlike karaoke in the U.S. where we all take turns singing, everyone was singing along to every song, dancing, and definitely integrating. I was so surprised by how many American singers everyone knew… And like us, they are all bothered by Justin Bieber and Miley Cyrus. I think that’s where a lot of the “crazy American” stereotypes come from.