Dhruv: We Won GOLD at BYSCC!

Dhruv: We Won GOLD at BYSCC! 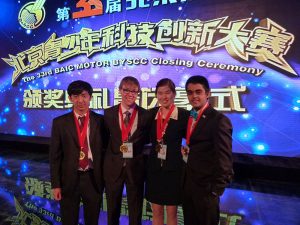 2. Dumplings are amazing and are actually called “Bao Tzu” in Chinese

3. “Black Coffee” is the name of a popular South African artist

4. In China, people use foam to paint calligraphy on the ground

Today we woke up barely in time to get breakfast before suiting up and bolting out of the hotel to attend the grand international awards ceremony. I suited up in my suit with my blue bow tie, which many people liked. I realized that most eastern Asian countries don’t have access to flashy items like bow ties. Maybe one day I will start a business selling bow ties to Indians and Chinese. Who knows, the idea could be worth millions of dollars (not RMB, I hope).

At the awards ceremony, we were once again handed the cheap plastic clappers with the small LED lights flashing in the middle. I couldn’t help but notice the large “MADE IN CHINA” plastered on the handle of the clapper. How ironic — in China, they still brand their own items. We were again subjected to an inspirational video describing the history and process of the Beijing Association for Science and Technology and the competition. The nice part of this video, however, was that it featured footage from the current competition, so my Danish friends and I were in the video quite a few times. We all liked that.

The video also gave me a sense of the level of progress that China has seen. This got me thinking about America and China and their differences in government. There was something frighteningly amazing about the level of efficiency in the Chinese government. Because of their unified Communist “Peoples Party,” they essentially have little to no opposition, which means they can do a lot of good… and a lot of bad… really fast.

While there are pros and cons to any system, I did notice that because of this, the funding of science education is bountiful and unobstructed. There is no party blocking the passage of federal spending on science and math, rather, there is one party that is (albeit forcibly) meant to agree on one idea and then stick to it. Despite our conflicts, we could actually learn a thing or two from the Chinese, and coming together on issues such as science education is definitely one of them.

Don’t me get me wrong for all you McCarthys out there, I’m not a red ole’ Commy after just a couple of days in Beijing… but there is something to be said about their ability to get things done. Now of course, just add in the human rights counterargument, and you have a nice little discussion. In the words of Winston Churchill, “Democracy is the worst form of government, except all the others that have been tried.”

Political reflections aside, I won GOLD at the competition, as did Forrest, Amy, and Edward. So did our Danish friends! Afterward, we took pictures with numerous delegations and then headed out to lunch at our oh-so-favorite school cafeteria. By this time, however, Amy and I had learned from the Danish girls that if you said you were vegetarian you could go to the upper floor where the food was better.

In reality the food upstairs was nowhere near vegetarian. As it turns out, this concept doesn’t actually exist in Chinese culture, but we were surprised to find the food quality was significantly better. The ambiance upstairs was also nicer. I noticed all the seats had backs, the food was served in trays rather than boxes, and only what appeared to be faculty and gold medal students sat there, while downstairs there were many students all crammed together in tight seating with seats without backs and nasty food. Maybe it’s best if I don’t get into a rant here, I’ve already ranted enough. Lunch was also better because I tried a red bean ice cream which actually wasn’t that good.  Being polite is key so I pretended it was good to make everyone happy. It wasn’t that bad… but it wasn’t that good either.

After lunch we went to the Summer Palace. On the way, I sat with my new friend from South Africa named Abongile and learned all about the insane things they do in South Africa. One thing I liked was how they take classics like Bob Marley songs and make their own instrumental renditions that are similar to deep house music. It was very cool music to listen to.

The Summer Palace was beautiful, but I saw most of it through a screen, that is, my camera screen. I got to bargain a bit for some presents that I bought for my friends and also bought some delicious street dumplings that were very tasty.

The best part of the trip was of course not the destination but what happened while we were there. As it turns out, most Chinese people have grown up without ever seeing an African or an Indian person before. Since Abogile, Monwabisi, and I were walking together, we noticed people staring at us. It was quite funny, actually.

The pinnacle of this odd voyeurism occurred when a Chinese lady approached my South African friend and bluntly yelled, “WOW.” It was hysterical. Rather than get mad, the South Africans took it very cooly and we started making a joke out of it, especially Monwabisi.

As we were walking, we ran into some African Americans from the U.S. who immediately came up to Abogile and Monwabisi and, mocking some of the Chinese yelled, “WOW, YOU’RE AMAZING.” It was classic. We all laughed and they all connected. For a moment, every pair of eyes was on the five African people and one Indian guy in the middle of Summer Palace causing a racket.

Afterward, we came back, exhausted. Dinner included a new type of alfredo pasta, about which the Italians had some choice words to say. Later, we went to the game room and played pool, worked out, and played ping pong.

I actually beat some Chinese dude at ping pong… which is a big deal because they are good. I felt like a boss. Now I have somehow ended up with a Chinese girl’s English Literature homework for which I am to read 50 pages of romantic feminist criticisms and help write a one page critique. How I got into this is another story which I am too tired to explain, but my NCAA bracket is doing a bit better (relatively) so my spirits are still high. Anyways, time to go digest this text and write a paper… Later!