Dhruv: The BYSCC Opening Ceremony Was Like the Super Bowl of Science

Dhruv: The BYSCC Opening Ceremony Was Like the Super Bowl of Science 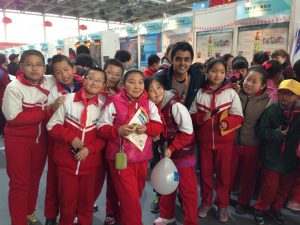 What I learned today:

2. When Chinese people say “white wine” they are actually referring to grain alcohol

3. Chinese kids all look the same in school, and this is on purpose. (I’m serious)

5. South Africans have the coolest accents on the planet (this is a fact, not an opinion)

6. The Republican Party doesn’t exist outside the continental United States. That is to say, 99% of Chinese support Obama, with the exception of one confused American Chinese Republican who supports Mitt Romney

7. China doesn’t have Wifi (most likely an overgeneralization but accurately sums up my experience so far)

Today started early at 7am. The first thing I did was check my NCAA bracket. No comment on my current mood regarding that. We then went to breakfast, which was quite rushed, and were quickly hurried off to the competition site where we would be judged. The competition judging was generally good, except for the fact that all three judges were native Chinese and had a bit of difficulty understanding our projects. The best part of the day, however, was definitely meeting all the international students. Since all of our posters were close together, we inevitably began mixing and I met so many new people.

First were the Danes: Laura, Christina, and Anna. They were really fun, especially Laura, who had actually lived In Australia, and is studying engineering. Then there were the Germans, named Nikolas and Miriam. Nikolas was brilliant! By age 19 he designed, built, and programmed an entirely functioning autonomous car…. basically what I’ve always dreamed of doing.

Then I met the Italians, named Felipe, Ciara, and Sarah. They looked really tired, and when I asked them about the food, they all agreed that Chinese food wasn’t the best. In fact, the restaurant at the hotel had served their own rendition of Spaghetti the night before called, “Fried Noodles in Italy.” Let’s just say the Italians weren’t very happy with the quality of that dish. Their booth was focused on history and physics, but more importantly they had really tasty chocolates so I stuck around for a while there. Lastly, I met the South Africans, whose names are un spellable (literally) but are probably something like Myongiuogi and Albedele. They had THE sickest accents. I literally just stayed at their poster to hear them talk.

One common question I asked all the international students was, “What do you think of when you think of Americans?” Most responses were expected, but one South African had met some Americans before that were extremely rude and belligerent, so much so that he was surprised that we weren’t all like that. After we met him, he said he was really glad to meet Americans who “weren’t loud, crazy, and called him the N-word.” I’m not sure who he met, but we have tried to create a better reputation.

After judging and meeting, we went to lunch in the school cafeteria, which was perfectly mediocre. One thing I’m starting to see is that Chinese food is very oily. Like… really oily. Afterward, we went to the school store and then to the auditorium for the opening ceremony.

I guess this is a good time to go on a rant about my observations of the culture promoted in Chinese schools regarding mass homogeneity within their populous. While in the middle school and walking around the ground, which I must mention was about the size of the Raleigh Convention Center, I couldn’t help but notice the odd yet increasingly obvious homogeneity everywhere: the blue sweat suit uniforms, dull-eyed stares, and hair cut in the exact same style for boys and girls. It was almost like the school was a manufacturing plant for robots, each with a different number.

This observation was only made further apparent when we reached the opening ceremony in the auditorium. Here we were given plastic clappers with mini lights inside to clap during the ceremony. I remember distinctly one shot on the multiple large TV screens in the auditorium overlooking the audience. All I could see were Chinese boys and girls sitting neatly, with their blue jackets, green clappers, clapping synchronously. No expression. No individualism. No thinking. Sitting like perfect toy soldiers, arranged neatly. I have to say it was an awesome sight.

After this, we watched a short clichéd video showing scenes of various Chinese kids looking bright-eyed into their mentors’ faces as they pipetted liquid at some random lab. The emphasis of the ceremony was to show the journey that Beijing has taken towards promoting science education, and I have to say they have done a damn good job. The whole time however, I sat with Laura in the Danish delegation and we just picked out funny people and zoomed in and took pictures of them. It was loads of fun, especially since all the speeches were in Chinese, so it’s not like we could understand them anyways.

One guy was an astronaut. We found that pretty neat.

Also, to all my friends at Enloe at home, I have been spreading Eagle Pride everywhere today. Between passing out pencils, stickers, and magnets… I’m almost sure EVERY delegation here has something Enloe-related now.

The best part of the day came at the banquet dinner. For this, all the international delegations were shuffled into a large dining banquet hall decked with exquisite decorations. Each table was set with hot wet towels, plates, chopsticks, shot glasses, wine, and the middle of the table was full of delicious Chinese delicacies which were spun around on a rotating glass piece. We used to chopsticks to grab food and put it on our plate.There were three rounds of food including roasted duck, lamb, vegetable dumplings, spicy beef and onions, and a whole fish.

The Danish girls had this weird voyeur like dude named Neil who followed them around as part of some mandate by some Danish agency to make a movie about them. It’s literally weird… like to the point where he was filming them while they were eating. Anyways, Laura and I had a fun time messing around with him since he got pretty mad when we looked into the camera, and I made sure he understood not to get me in any of his little wanna-be-Hollywood Danish dramas.

After dinner, everyone loaded back up on the bus and we came back to the hotel. Back at the hotel, Yegor and I wandered around and found all the rooms of the international students so we could inform them of the party we are planning at the hotel disco tomorrow. After playing Foosball, working out at the gym, and playing the South Africans in a heavily-contested pool match (which we shouldn’t have lost), we came back to the room and are ready to pass out.

Lastly, I have to say GO DUKE, as my team plays today. And, to all those dorks who support NC State… Go State, I guess.