Dhruv: Seeing the Chinese Students’ Projects, All I Could Say Was “WOW”

Dhruv: Seeing the Chinese Students’ Projects, All I Could Say Was “WOW”

I should preface this blog and all my others by saying I avidly enjoy senseless immaturity and I tend to *over*analyze everything, especially political culture and lifestyle.

1. Australians love to convince people that the “Drop Bear” exists, but it doesn’t

2. Peking University is the Harvard equivalent in China

3. Everyone wants to go to Peking University, so much so that even I do now a little

5. South Africans are Tanks (my friends will understand this one)

We woke up early this morning for the day of exhibition for the public. At breakfast I tried the omelette bar, but overall the same food is getting a bit tedious. When we arrived at the middle school again for our competition showing, we hunkered down for about seven hours of standing and presenting to the middle and high school students from all over Beijing who had taken the day off to come see our projects. Here is where I will go on several rants.

1. Chinese youth are SOO CUTE (I’ve already said this but I feel the need to re-emphasize)

During the showing, many Chinese schools came, including some as young as elementary school. It seems to be a reoccurring theme here to inspire an interest and passion in science education from an early age, but more on that later.

Anyways, I remember seeing the first swarm (that’s what I will call them from now on), as they came in a semi-orderly line. All about four feet tall, wearing red and white uniforms, same hair cuts, but one difference… they were about 6-7 years old and RIDICULOUSLY CUTE.

Since I spent most of the time at the Danish exhibit, the girls decided we should all take pictures with them and we did. The cute little Chinese girls with their chubby cheeks and bright-eyed smiles were enough to melt anyone’s heart, and they looked at us as demi-gods from America and Europe. Honestly it felt freakin’ awesome.

There were many swarms of young, excited Chinese students. So giddy to see us, they could hardly look at me and my poster with out snickering, laughing quietly, and running chuckling away when I tried (with little success) to say “Wa Ja How, Do Jow Dhruv” (hello nice to meet you, my name is Dhruv). I’m not sure if they were laughing at me or my accent or the fact that I was the only Indian person they had probably ever seen in their life, but to me it didn’t matter much.

2. The international students have become a family (more or less)

All of us have really come together by now. Particularly, I  love hanging out with the Danish girls named Laura, Anne, and Christina. They are without a doubt the craziest of all the people here, so it’s fitting that I gravitate towards them, especially Laura, who is very fun.

Amy has found her niche with the Australian girls who are about 13-14. I have to say their group is more akin to some quasi-mean girls group, (never thought I’d use those words in the same sentence), but nonetheless they are very bubbly, gossipy, fun girls.

I have also made some good friendships with Nikolas from Germany and my roommate, Yegor, but also the South Africans whose names I can now spell: Abongile Xeketwana and Monwabisi Dingane. The former’s last name actually has a click in it. A CLICK! It’s so cool. We always joke about it in America, but it actually exists. And of course their accents are amazing. When Abongile says “yes,” he says “Yeez” in a very deep tone. He’s a tank.

Throughout the day we did a lot of networking. One lady I met actually did her post-doc at Harvard in the department of Chemistry fabricating nanoscale biosensors, so she took great interest in my project. After getting her contact information, I later found out she was just recently hired at Peking University as a professor. Needless to say I was honored by her interest in my project. I will definitely keep her contact information in case I could one day study here.

Professionalism aside, today was also the first day we got to interact with the other local Chinese students and their projects. All I can say is WOW. 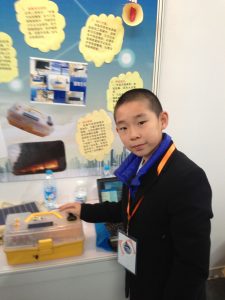 I met a young boy named Peter who had built an emergence carbon monoxide detector fully equipped with a  solar cell, hand-cranked flashlight, siren, and AM/FM radio. The device had all the bells and whistles but the catch was that Peter was only TWELVE!!

It’s amazing, and he was such a salesmen. His English was perfect. He reminded me of a salesman from a car dealership. But it wasn’t just Peter. Rows and rows of exhibits were filled with young and old Chinese students with massive displays of engineering and robotics in particular. Clean water filtration systems, semi-autonomous robots, hydraulic bed pumps, musical Van de Graaf machines… it was the works!

After a long day of project exhibition, we filed in for dinner at the school cafeteria (again). Dinner was just cafeteria food, so I ate an apple. As it turns out, I wasn’t supposed to eat the apple, as the Danes informed me that the skin may not be clean and I could get sick. So even that wasn’t that great… but thankfully I haven’t had any sickness yet.

After dinner, we went to the local awards ceremony held in the great hall. It was amazing and quite similar to the opening ceremony with lots of lights, music, and generous verbose benedictions from government and agency officials about the importance of education in science and technology and Beijing schools being at the forefront of education.

The best part was once again seeing the entourage of government officials come in as royal music played and everyone clapped. They all looked so happy and proud, and everyone looked at them with the utmost respect.

For the awards ceremony there were many cultural performances, one of which was the Lion dance that I was chosen to go up for. As it turns out, the Danish girls also wanted to come, so we all went up and danced as lions. It was loads of fun and hilarious to be on stage getting yelled at in Mandarin in front of about 300 Chinese students. 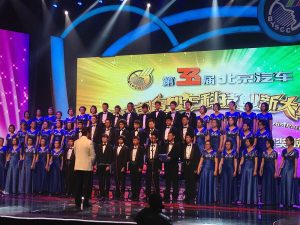 The other cultural performances were equally as grand, with huge LED backdrop screens around the stage that complemented each performance. For one, the theme was the sky and spring and all the dancers were dressed in traditional blue Chinese outfits. As they danced, the LED screens showed clouds wafting in the sky and flowers dangling in the sunlight. It was quite magical.

The choir, world renowned choir at the Beijing school, sang in white tuxedos and blue dresses. Their pitch was perfect. Lastly was the Jazz performance, and I have to say this was laughable. It was a total cultural clash in my opinion, most likely for the appeasement of the western taste in the audience rather than for the Chinese. The piano player was a cut and dry tight-knit Chinese boy who couldn’t relax. It was classic. I’m only saying these things because I myself have been in a jazz band for two years, so I knew a bit of what it should be like. To keep it short, the word “swing” is not one you will find in the Chinese vocabulary.

What was even better was the Chinese government officials’ responses to the Jazz. They all sat with countenances of boredom and almost disgust. Maybe it was because they felt like the performance was the further proliferation of American individualism and western culture into an otherwise classical Chinese ceremony. Or maybe it was me just being an *over*analyst as usual.

When the awards were presented, it was amazing to see the students’ reactions. As each name was called in Chinese for students to receive their monetary awards, large “oos” and “aahs” could be heard all over. The student who earned the largest prize  received 25,000 RMB (Chinese currency). The other students stared at him with transfixed eyes, idolizing him as a role model and hoping for his success in the future. In my opinion, role models shape a society and its clear that in China, the role models are in science and technology. (hint hint)

After the awards ceremony, we headed back to the hotel and Yegor and I hung out with my Danish, South African, and German friends. I have to say, Yegor is like a combination of one of my best friends named Luis and a character named Borat. I love him! And Yegor’s mentor is a wizard. He looks like a combination of Dumbledore, Albert Einstein, and Frankenstein. His eyebrows are wicked. And of course, he has a solid Russian name (Vladimir Ivanovitch). I actually took a picture of him and Laura made it my background of my iPhone, which was funny until he found out. Then it was awkward.

Anyways, hanging out with the international students is really fun. They are so carefree and make me really enjoy life and people. I’m planning now to study abroad in Denmark for sure and maybe even Australia and hopefully make a visit to Kiev. That’s all for now. I’m following updates on the NCAA tournament. I wish I could be home just to watch the games… but China is still fun.