Dhruv On Developing His Bargaining Skills at the Silk Market

Dhruv On Developing His Bargaining Skills at the Silk Market 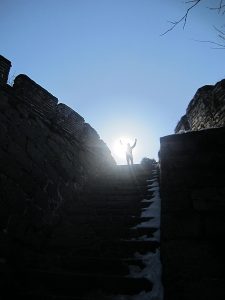 1. The great wall of China is pronounced “Chang Chung” in Chinese

2. Chinese people think most Africans are related to Obama

3. Everything is better bought in bulk in China

4. My new name to the South Africans is “Rajesh” and I’m not sure why

Today we woke up late (again) and rushed downstairs for a quick breakfast before heading out to the main attraction: the Great Wall of China. Once there, we began the hike upwards to the Wall, and boy was it a hike. When we finally reached the Wall it was just what you would expect. For miles around, I could see mountains, more of the Wall, and pristine scenery. It was stunning. The only thing distracting me from the breathtaking scenery was a large metal slide that we noticed while hiking on the way up, but more on that later.

Edward, Forrest, and Abongile decided we would climb to the highest point on the Wall that we could see. Little did we know that we would actually have to climb on all fours at some points because of the sheer steepness of the steps. Whoever made the Great Wall (excuse my historical ignorance) sure didn’t think about people that much since most of the steps were corroding with snow on them. At the top of the stairs we met some Chinese merchants who immediately tried to sell us food and drinks before being shocked at the sight of Abongile, who is South African. All of sudden they were yelling, “OBAMA! OBAMA!” Once again, it was classic.

At the top, I got a really cool picture of me from the bottom up with just my silhouette against the backdrop of a glaring sun. Honestly, the picture was godly. I did feel like a boss.

When we climbed back down, we met up with the rest of Team USA and, yes you guessed it, filmed our version of the Harlem Shake. It was a typical American thing to do and we even got Dr. Nolan to dance. We have high hopes for this video on YouTube… look for it in the near future.

The best part of the Great Wall wasn’t the Wall itself, but rather the luge roller coaster built on the side of the mountain for tourists looking for a thrilling fast-paced luge for descending the mountain rather than walking all the way down.

The luge wasn’t for everyone, but of course all the international students and the entire U.S. delegation opted to purchase a ticket for the ride down. On the ride, which was a bit sketchy, we rode go kart-like metal cars on a tube. After getting a small push, gravity did the rest. It was loads of fun. I think we all at some point thought to ourselves on the ride, “I’m literally luging down the mountain of the Great Wall in Beijing, CHINA.” It was one of those moments I will never forget. We all felt the need to video tape the entire ride, much to the chagrin of the Chinese officials.

After the thrilling ride down, we went into a local market to shop (or battle, if you ask me). Each merchant was standing there with their prices jacked up by 1000%. At first my bargaining was soft. I’d pay roughly one-third of the price of what they asked. But then I started to warm up, and that’s when things got going. I quickly adopted a new policy: take their price, drop a 0 off of it, tell them, then walk away. This actually had a fair amount of success later on in the day at the Silk Market, but at first I was a novice. The best deal I got was for a genuine hand-carved wood relic from 365 RMB down to 30, which is only five U.S. dollars.

Next, we went to have lunch at the Beijing Association for Science and Technology, or BAST. It was the last official dining experience we all had together as a group and it was definitely the best. It was almost as if the BAST cooks had taken every good food I had in China and then made it even better. We ate duck, beef, chicken, dumplings, rice, soup, pickled vegetables, fresh fruits, fried rice, fried meatballs, and more. It was absolutely the best meal I had during the whole trip.

Then we headed down to the Silk Market for a five-hour planned shopping spree. Excited at our arrival, I began surveying the mall. I quickly noticed that absolutely 100% of EVERYTHING was fake. Tommy Hilfiger = fake. Ralph Lauren = fake. Gucci, Prada, Chanel, Lois Vuitton, Ray-Bans, ALL FAKE.

It was hilarious, and even more funny when I would call the merchants out. They would go on long rants about the costs of shipping they had to pay to get the clothes here. The joke was on them because the sweatshop was underneath the mall and I’m pretty sure I saw a glimpse of it.

Nevertheless, the best part about the market was the RUTHLESS bargaining, something I got insanely good at. In particular, I had a very interesting experience buying electronics. As it turns out, Chinese electronics are not just fake. There are LEVELS of “fakeness.” For example, Beats by Dre is a huge audio headphone producer,  but not a single one of them in the store was real.

In fact, the Chinese have been known to and were recently busted for fabricating ENTIRE Apple stores. Yes, that’s right, the ENTIRE store. Anyways, I quickly found out that the “fakest” beats are the ones that they first offer you. These headphones were essentially from the dollar store with a sticker of the Beats symbol. Starting price: 800 RMB for the sad old tourist.

But if I called them out for being fake, which most people (including myself) did, the merchants offered you the “real” Beat headphones, which in fact were only SEMI-fake Beats. Starting price: 1800 RMB. I decided the semi-fake were good enough, and after half an hour of negotiation, including being cussed out twice and being called an idiot and crazy Indian, I got my semi-fake “real” Beats for 180 RMB (~$30 U.S. dollars). I also got eight scarves, six ties, and loads of other useless paraphernalia that I just honestly bought because I could bargain so well with the merchants.

Don’t worry, I’m not evil. You naive consumers must realize that it takes about 1-2 RMB to make some of the most expensive items in that mall, such as the Michael Kohrs watches and the Chanel handbags. I was just playing their game. Bargaining is an evil art, but it can get feisty, especially if they think you are just playing with them.

When I went to buy a cashmere sweater, the starting price was 1800 RMB and I offered the lady 20 RMB. I nearly had to dodge a slap from her and then listened to her talk about her hard life and no profits. But I did feel a little bad and decided to pay a lot for the sweater at 350 RMB.

For dinner we had Chinese KFC. It tasted odd and there wasn’t any honey mustard, so I didn’t like it.

After dinner, we went to walk around near the local foreign embassies. We quickly learned two things:

1. You’re not supposed to take pictures of foreign embassies

2. The U.S. embassy is so big that we have not one but TWO separate embassies. Go “MURICA!”

Next, we headed home with empty wallets and bags of fake clothes, jewelry, and merchandise. When we got back to the hotel, all the international students went to the game room and just hung out before going our separate ways. Amy and I hung out with the Danes for a bit while they packed. It was kind of cool to see that Laura knew all the music I listen to! She knew Kid Dudi, Lupe, Coldplay, Tiesto, and even Pink Floyd. It made me realize how flat the world really is.

Anyway, the trip has been absolutely amazing and tomorrow we leave. Without a doubt, China has been the best experience of my life. Though the science, the food, and the experiences were great, there’s nothing to match the people I’ve met here and international friendships I’ve made. These guys are amazing and I can’t believe we have all gotten so close within such a short time. Saying goodbye tomorrow is going to be tough.

Now I’m exhausted and have to go pack. Goodnight!