Dhruv: Beijing Food is a Tasty Smorgasbord of Savory and Sweet

Dhruv: Beijing Food is a Tasty Smorgasbord of Savory and Sweet 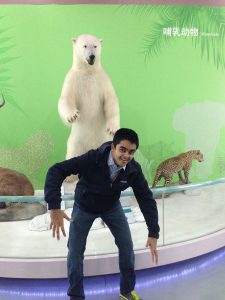 What I learned today:

Last night before we went to bed, my roommate, Yegor, and I wandered around the hotel, which is really nice. We went into the game room and played pool, ping pong, and Foosball. Yegor and I get along really well and I like learning from him about Ukrainian culture. So far, I’ve met students from Australia, Denmark, Italy, Germany, Ukraine, and South Africa.

When we woke up this morning, we went straight to breakfast. The best word to describe the breakfast was… interesting. It was a weird yet tasty smorgasbord of savory and sweet items ranging from noodles and meat to steamed dumplings with red bean paste inside. Surprisingly, they had Kim-chi  a Korean fermented cabbage dish, which was very tasty. There was also an omelet bar.

After breakfast we went to the Beijing Museum of Natural History. Since we only had an hour, the museum tour was pretty fast but Yegor, Amy, and I still managed to take some goofy pictures. The best part of the museum was seeing the little Chinese kids running around. All of the children are dressed similarly: red jackets, chubby cheeks, and black hair. 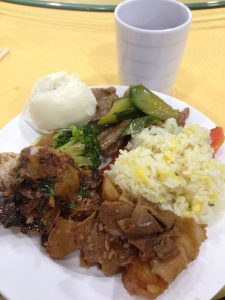 Afterward, we came back to the hotel for lunch, which was similar to the dinner we had last night. I’m starting to get better at using chopsticks so that makes eating much faster.

One thing I’ve learned about Chinese food is that everything is the exact opposite of what you think you are eating. Every dumpling I’ve tried here has been something totally unexpected. I think the one I had at lunch had an apricot filling… definitely not what I expected.

Afterword, we went to the competition site to set up our posters at a middle school. The school was very modern and huge, with a massive track with hundreds of Chinese kids doing exercises in perfect harmony while wearing blue and white track suit uniforms.

Inside, we quickly realized our posters were WAY too complicated for the level of English most people would understand so we worked with our translators and guides for over two hours to add Chinese characters to our posters to make them easier to read.

I was interviewed by a local TV show about my research, which was a bit tedious with the translators. The interviewer asked me about “Science and Happiness”, which is the theme for the BYSCC this year. I was a bit surprised that someone from China was asking me about happiness. It didn’t seem to fit my understanding of their culture, but I was happy to answer his question (pun intended).

After we came back and had dinner, we went shopping at a local mall where I stocked up on local Beijing pastries, authentic Chinese chips, cookies, and even some tea.

Now the jet-lag has kicked in big time so I am about to pass out, but not before I dig into some of these treats I bought at the market.