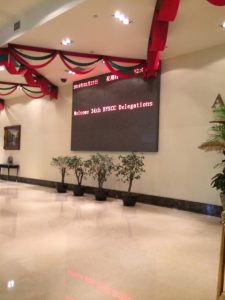 Back in the poster hall—today was another day of presentations, but this time for the public instead of judges. Students from local schools were practically streaming into the building all morning and afternoon, and they all seemed genuinely interested in everyone’s project. Although the judges yesterday spoke some English, the audience today was mainly fluent in Chinese… Our translators had a lot of work, which they handled wonderfully. All of us were surprised at how quickly they were able to understand our projects down to minute details, and how well they verbalized them to visitors.

After we gave our presentations for a couple hours, one of the delegates managed to start the trend of giving out autographs to the Beijing students, which was flattering and hilarious and pretentious all at the same time. The students also wanted to take a lot of pictures with us.

After presenting and dinner, we went to a special awards ceremony where a lot of the Chinese competitors received scholarships for their research. There were also a variety of dancers and other performers; one of them gathered a group of volunteers and got them to join hands in a circle. The performer passed one of the students a Leyden jar and everyone in the circle got an unexpected mild electric shock. Funny for the audience, although I’m not so sure about the volunteers. 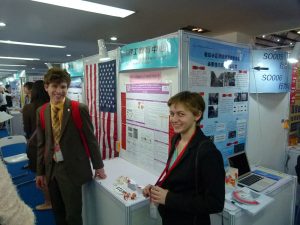 After the ceremony, we came back to the hotel and played cards for a while. At this point, it’s the middle of the night so going to bed would probably be a good idea, but we can sleep in a little tomorrow (when we’ll be going to a few other events, but I’ll save that for when it actually happens).