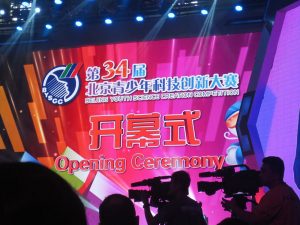 We once again found ourselves with our posters, presenting our work to French and Chinese judges. All the judges spoke English, so our translators didn’t have to supplement too much; however, even with their help, a few things seemed to get lost in translation every time I presented. I persistently had problems with helping the judges distinguish between the chemicals alum and aluminum, which made things a little confusing. We eventually got through it though.

After presenting we went to dinner. The opening speech took double the time because it had to be spoken in Chinese, then English. When it was finally time to eat, everyone at our table had put their napkins on their laps, but after a waitress corrected one of us, we looked around and realized none of the other countries placed their napkin there. Instead, the napkins were placed under the plates.

During the meal, I was forced to branch out from my typical main course of rice. I tried a few foods drenched in enough sauce that the food’s original taste was basically masked, but couldn’t quite make myself eat the fried squid. Next time. Maybe.