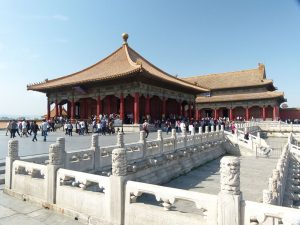 Today the USA delegation broke off from the rest of the delegations for the afternoon to tour Tiananmen Square and the Forbidden City. While we were walking through Tiananmen Square in the midday sun, some of us beginning to regret our decision to wear dark jeans, Dr. Nolan pointed out that the square had never been less crowded. We had been warned that the space would be packed, but somehow we chose a day where both the square and the sky were clear.

Walking into the Forbidden City, we all took pictures of every building, corner, and statue and of each other probably squinting and blinking in the light. I took so many photos that my phone photo capacity ran out towards the end of the excursion. After we left the Forbidden City, we got a delicious lunch at a noodle bar that our translators recommended as a highly authentic and tasty restaurant. Once we got back to the hotel the rest of the afternoon passed in a blur. The four of us ate dinner at the hotel, then walked down the street with some of the other delegates who wanted to eat duck at a nearby restaurant. We didn’t get back too long ago, and I think everyone is exhausted from our day, so I’m turning in for the night.