Amy: The Great Wall of China Was Stunning

Amy: The Great Wall of China Was Stunning 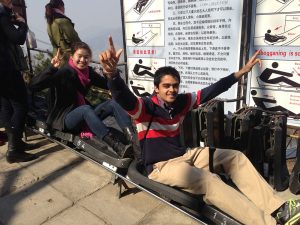 Every day here has been an incredible adventure, and today, “adventure” was an understatement. Since I have a tendency to make lists, here are some things I tried for the first time:

1. At breakfast, I tried Chinese Oreos, which were in wafer format rather than cookie format and were slightly coconut flavored. They were very good. I used to think that Chinese sweets were not as sweet as their American counterparts, but these Oreos were just as sweet as the standard American kind. Maybe the overall tastes in China have become more sugary in the past few years? Either way, Dhruv and I agreed that wafer Oreos are a really good idea.

2. At the Great Wall, we climbed up using steps rather than the cable lift, which I had taken the last time I came to Beijing. I absolutely love stairs, so it was really fun, although I definitely wore way more layers than necessary. It wasn’t cold at all, and I was sweating toward the end. The Great Wall was stunning just as I remembered it, and it was surprisingly not crowded.

They say that the Great Wall is like a crest on the back of a sleeping dragon of mountains, and that description is perfect. I got pictures with students from almost every BYSCC country. Unfortunately, I missed the Harlem Shake video that the rest of the American delegation made, since we got separated, but at least when it goes viral I’ll be able to say, I was there and watched the tail end of it… 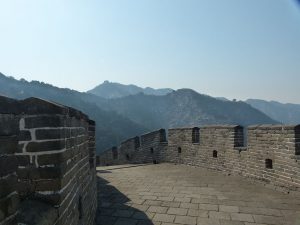 3. Then – this is mind-blowingly cool – we luged down the Great Wall. Basically, there was a sled with a vertical handlebar that you sat on, and it twisted and turned down a beautifully convoluted metal slide. Pushing forward on the handlebar made you go faster; pulling back would slowed you down. I pushed forward relentlessly, despite the various ride coordinators and giant signs along the way that read, “man yi dian!”, or “slow down!” I can still feel the wind on my face and hear the clickety-clack of the luge when I close my eyes. It was way more cool than any roller coaster I’ve ever been on. That definitely won the “Most Awesome Descent” award.

4. In the evening, we (the American delegation) got shooed away from the U.S. Embassy for taking pictures in front of the U.S. Embassy sign. Apparently, the U.S. Embassy is huge enough that there are two compounds, both surrounded by high barbed wire fences. The other countries’ embassies were guarded by Chinese soldiers, but the American one wasn’t… until we started snapping pictures. There was a cat on the porch of one of the compounds, and I remember wondering whether the cat ever left the embassy, and if it did, whether it realized it was bridging international relations. Maybe the cat was a spy, even. Or maybe I just have a runaway imagination.

5. I learned that Baskin-Robbins is shipped over the ocean from America to China, and thus the Chinese flavors are exactly the same as the American ones.

6. I have started occasionally thinking in an Australian accent, which means I am one step closer to being able to speak with it. So far, the two phrases I can say best are “I’d shave it” and “You’re such a geek.”

7. Finally, throughout the day, I learned to barter having tried it for the first time. At the Great Wall, I bought things for 60-70% asking price, and thought it was a good deal, but actually I still paid ridiculously overpriced amounts. I learned later that I should have gotten everything for less than 10% asking price the way Dhruv, who is brilliant at bartering, did.

Naturally, I felt terrible for spending so much money unnecessarily, and also naturally, I became consumed with a mission to improve. So, on the bus ride to the Silk Market, I wrote down everything I had realized about bartering and organized them into a list of rules. When we got there, I watched Dhruv in action. He got a fantastic deal on silk ties. I got a “Michael Kors” (the quotation marks are there for a reason) watch for 90yuan, down from the original of 400yuan, which I considered a success because I followed my rules, and the translators had said to expect to pay 1/4 to 1/3 the asking price. Later, Jeff got two for 80yuan each, so it was reasonably decent.

Still, I always could do better. I’m working on it. The key to negotiating is knowing how much it’s actually worth and going in with a price regardless of what they say. Or, do it like Dhruv does: slash a zero off the end of the asking price, insist, and walk away, and even if you get your price, walk away. I personally think that his strategy wins the “Second Awesomest Descent” award.

Another thing that happened today that made my day was that I got an email from Max, one of the Chinese students I had met during the competition. It was an incredibly sweet and thoughtful message, and I’m glad I really will be able to stay in touch with the people I meet here.