Amy on What She Learned From Other Countries Represented at BYSCC

Amy on What She Learned From Other Countries Represented at BYSCC 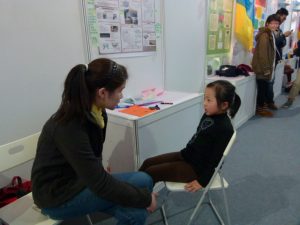 I. Lost. My. Phone. And. I’m. Panicking like crazy on the inside even though I’m acting relaxed and calm on the outside. I don’t know what to do because I’ve tried everything. The hotel staff and BYSCC people are really nice. They did their absolute best to help, which I really appreciated. For example, they searched the places I’d been last night as soon as I asked but didn’t find anything. They also let me go into the security room and watch surveillance videos to see when I was carrying it and when I wasn’t. The videos were pretty blurry but I know now that I lost it last night when we went exploring the hotel. Now my phone is gone — goodbye contacts, photos, and Robert Lefkowitz’s signature on the back. It was an iPhone and I’m crushed. So, yeah. That’s how it feels to lose your phone in a foreign country.

Yesterday I felt like parts of me were unraveling and coming apart, but today, things came together, though I still didn’t find my phone. Actually, to rephrase that statement, today, people came together. I met and got to know people from Denmark, Italy, Australia, Singapore, Malaysia, and South Africa, and became closer friends with the people from China, Germany, and Ukraine that I already knew. It was incredibly fun and exciting.

Today required a professional dress code, so I wore a black skirt suit I bought specifically for this trip. Then, I had breakfast and caught the 7:10am bus to the school. The school was huge. I’ve seen Chinese schools before, but this one was all glittering glass windows and lofty staircases, and it sprawled like a stretching cat.

There were giant BYSCC signs the size of school buses and free water bottles that I gladly took advantage of. Our super hardworking, talented, and sweet translators helped create the Chinese translations for our posters, and then we waited until judges came by to hear our presentations.

I had three judges, and they were really hard to read. I couldn’t tell whether they understood or if I was talking too quickly. They let me present in English though, which was good. My conversational Chinese is decent. My ability to read Chinese is so-so. My scientific Chinese? Nonexistent. I spent about 10 minutes trying to explain “mercury” yesterday when we were translating (“It’s like… melted steel at room temperature, and the last Chinese emperor took pills made from it…”).

When we weren’t presenting for judges, we hung out and met people. It was so awesome! Here’s one cool thing I learned from each country:

Denmark: In Denmark, they have licorice candies, except the candies taste more like sour medicine. One of the projects from Denmark was a sunscreen lotion made from algae.

Italy: The Italian students were from Rome, and they knew the school I had visited when I went there last month. Their school houses a museum that has an ancient spectrometer, which they brought and I looked through.

Australia: In Australia, people call McDonald’s “mackers” and there are Drop Bears, which are like koalas that fall from the sky to attack you.

Singapore: In Singapore, chewing gum is really frowned upon, and, in some cases, illegal. You never have to worry about gum stuck under the table!

Malaysia: Malaysia is really diverse. A common language is English but many people there speak three or more languages.

South Africa: In South Africa, school is held six days a week, from 8am-4:30pm. Students there only get two months off from school per year (one month in the summer and one month in the winter). It’s really hot all the time there and it’s summer right now. “Hello” in the mother tongue, Isi Xhosa, is “Molo.”

Germany: One of the projects from Germany was a self-driving car built from scratch.

Ukraine: In Ukraine, the worst bad word has a masculine form and a feminine form. I won’t repeat it here. So cool.

I also met a girl from China who did her project on the 2012 American election, and another girl who did her project on the desertification of the area around Beijing. Both times, we had the usual conversation: “Are you Chinese? Where did you learn Chinese? Where are your parents from?” They were impressed by my Chinese though really I think they were just being nice!

In the afternoon, we went to the opening ceremony, which was very flashy. It featured strobe lights and large-screen videos, top Beijing company representatives, scientists, and astronauts. There was also golden confetti, flags, light-up plastic clappers, cheering, and booming microphones… you get the idea.

It really reminded me of programs I’ve seen on Chinese TV, which was cool. I translated the speeches for the Australian girls sitting next to me. After that, we had a scrumptious formal banquet dinner at the Shunyi Hotel. It was a very adventurous dinner, in many ways.

Now, we’re back at the hotel. I’ve just finished playing a few games of pool with two guys from South Africa. One of them had the ability to predict where the ball went every time I hit it. As I made every shot, he’d say, “Oh, nope, you’re not gonna get that one,” or “Yeah, this one’s gonna go in.” He was always right. He said the first phrase ten times more than he said the second one! I’m not very good at pool.

I wonder what exciting adventures tomorrow will bring…