Amy: I Felt More Confident Being Unofficial Translator in Beijing

Amy: I Felt More Confident Being Unofficial Translator in Beijing 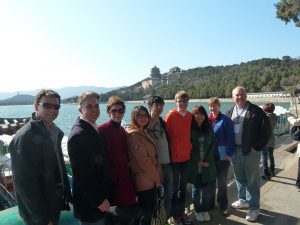 Today, we slept in since the awards didn’t start until 9am. I wore my dark green skirt suit and black classic interview high heels, the same outfit I wore to present at NCISC for the chance to come here to Beijing. At the award ceremony, and I sat with the Australian girls from Shenton named Ellie, Sarah, Sarah, Eemali, and Daisy.

They gave me the only Shenton pin they had with them, and I felt really honored to receive it. I have 9 pins on my badge, and I know them in order without looking: Denmark, Ukraine, Italy, Germany, USA, China, South Korea, Hong Kong, and Shenton Australia.

The only two pins that I could have gotten at some point but didn’t were the Malaysia pin (they ran out) and the BYSCC pin (I didn’t see the person who was giving them out). I’m really proud of my pins because each one reminds me of friends that have gone from strangers to family in merely three days.

At the ceremony, they gave out 10 Mayor’s Awards, the absolute best BYSCC award possible, which grants the recipient automatic acceptance into Peking University, several sets of Inspiring Teacher awards. There were several speeches by high-ranking officials, who the Australian girls called “big potatoes,” as opposed to “little potatoes.”

All of this was followed by well-written closing remarks, which I translated for the Australian girls. I really liked the three stated goals of BYSCC:

Even though they listed the goals in somewhat flowery language, I liked how they emphasized that it wasn’t only about the recognition, but more about creating excitement and curiosity for science and technology. I think in China, where recognition is incredibly important, it’s nice that they at least try to balance that.

Then we took photos, ate lunch, and boarded the bus to ride to the Summer Palace.

I seemed to become the unofficial translator for the international students. At the Summer Palace, I was a tour guide for Dhruv, Sarah, Monwabisi, and Abuongile. From pointing out the Seventeen Tunnel Bridge, the Long Corridor (these are all rough translation names, by the way), to finding good photo moments, to helping them buy bao zi and xiang chang to eat, I felt like I was contributing. I also felt more confident. Although I shouldn’t get too confident; that’s how I lost my phone.

At the Summer Palace, everything shimmered with warmth. The sparkling clear Kunming Lake, the inviting entrances, the stunningly intricate paintings, and the atmosphere were all really nice.

There was an older man practicing Chinese calligraphy with a giant foam brush and water on the grounds at the Summer Palace. He let me hold the brush and try to write my name. I clumsily wrote “xu” in Chinese, then let him write my name for me in his breathtakingly beautiful handwriting.

Afterward, I gave him one of my cards, and he gave me some of the calligraphy he’d done on paper. It was artfully precise and done on delicate rice paper. I was touched that he was willing to give me one.