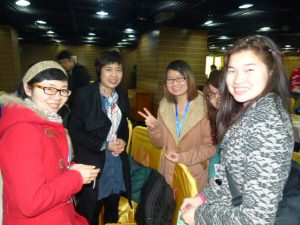 Today, I am reflecting on some of my misconceptions while at the Beijing Youth Science Creation Competition.

Drop Bears don’t actually exist. Apparently, it’s an Australia-wide inside joke that when you go overseas, you tell foreigners about drop bears and see if they believe you. Oops, I guess I’m an unsuspecting foreigner. I told Ellie, Sarah, Eemali, and Daisy from Australia that I actually blogged about Drop Bears. They thought I was hilarious, and we had a lot of fun laughing about it together.

A day ago, the idea of explaining my research in Chinese was unthinkably intimidating. I had mentally labeled it basically impossible. But every time I explain my research to people, I can feel myself improving, and it’s a wonderful feeling. I remember the first time I explained my research, even in English, I needed our translator, who I call Zhang Ge Ge, to help with everything. I felt that he gave more of the presentation than I did. Eventually, I graduated to being able to explain in English well enough that I needed Zhang Ge Ge’s help for only a few key words.

Today, I tried explaining the project in my watered-down Chinese and makeshift technical terms. “Electrodeposition” turned into “make the chemicals stick to the glass by throwing electricity into the liquid.” “Morphology” turned into “look at how the chemical thing is built on a very very little scale and see if it has the right size and shape.”

I managed to communicate the major points of my whole project to a very kind and patient high school student. I think it’s a combination of gradually absorbing more and more Chinese and understanding my research better through explaining it, both of which made me really happy.

I used to think that America was the best at recognizing science, since our government and school systems place such a solid emphasis on STEM and related fields, but today’s award ceremony shattered that idea.

The award ceremony was for the Chinese students, not the international students, and it was mind-blowing. Award announcements were alternated with performances. We saw traditional Chinese orchestras, dances, poetry slams, comedy skits, and choruses, all in a whirlwind of color and sound. It reminded me of a smaller version of the Chinese New Year celebrations I’d seen on TV. The announcers were brilliant, and I was really impressed. I was surprised to see these performances mingled with science, and I realized that America could actually be even better about science recognition.

I think if you took what I learned today and put it in a bucket, it would be overflowing, and I love it.